‘Hedgehogs’ versus tanks, as Kyiv braces for Russian onslaught 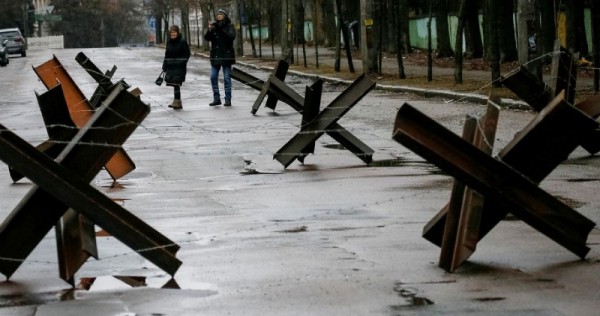 KYIV – As Russian troops closed in on Ukraine’s capital Kyiv on Thursday (March 3), a muddy construction site in a local neighbourhood was teeming with workers and welders of the KAN real estate developer.

Instead of homes and offices, they were making giant, metal anti-tank barricades known as “hedgehogs”, and smaller spiked barriers aimed at stopping wheeled vehicles.

After Russia invaded Ukraine on Feb 24, KAN, a large local property company, reinvented itself to help the defences of the city of 3.4 million people.

Zakhar, a foreman, picked up the phone and started calling the company’s construction workers who had remained in Kyiv. Almost everyone volunteered to stay and contribute, he said.

“We build things. We do not know how to fight, but we knew we could be useful,” Zakhar said. A few metres away sparks flew as builders cut through and welded together large metal beams.

It is another example of how Ukrainian civilians are supporting regular troops as they try to repel Russia’s advance, including through civil defence units and independent militia that have formed across the country.

Russia says its actions in Ukraine are a “special operation” not designed to occupy territory but to destroy its neighbour’s military capabilities and capture what it calls dangerous nationalists.

Ukraine’s military is dwarfed by that of its powerful neighbour, but resistance in the first week of the conflict has slowed Russia’s progress, particularly in urban areas.

Russia has captured one Ukrainian city so far – the southern Dnipro River port of Kherson – and has bombarded others with increasing intensity, including Kyiv and the country’s second city Kharkiv.

A giant column of Russian armour has stalled as it approaches Kyiv from the north, delayed by resistance, mechanical failures and congestion, according to the British defence ministry.

Hundreds of thousands of people have fled the violence and crossed into neighbouring countries. Men of fighting age are prevented from leaving Ukraine.

‘We will throw spears’

On Feb 25, Kyiv’s mayor and boxing champion, Vitali Klitschko, said the city “has gone into the defensive phase.”

Heavy equipment was brought in to build concrete checkpoints, blocking positions and bunkers inside the city and along all major roads and in the suburbs.

At KAN, workers cut long pieces of girder using blow torches and angle grinders, welding them together into triangular barriers used to bolster fortifications and slow the movement of tanks and tracked armoured personnel carriers.

So far the makeshift factory, which started operating this week, has produced 110 large hedgehogs, including 40 in the fist 12 hours, Bodyuk said, adding that the company runs other similar sites in the city.

“We have demands from many places for these types of blocking devices, we deliver them wherever they are needed in the area … subcontractors and friends are providing transportation for the products and the material,” he said.

Andriy Kryschenko, Kyiv’s deputy mayor who was wearing military fatigues, said many similar firms and workshops had adapted to produce hedgehogs, concrete barriers and other defences.

He added that tens of thousands of people in Kyiv had received weapons and many more were waiting at enlistment and recruitment offices. The city hall was also supporting Territorial Defence units and troops at the frontline, Kryschenko said.

At the construction site, Serhiy Serdyuk, a grizzled welder in his 50s, said workers were ready to take up weapons and join the fight.

“If we have to, when the materials run out, we will make spears and we will throw those spears at them.”

Thai democracy activists sign up to fight ‘tyranny’ in Ukraine