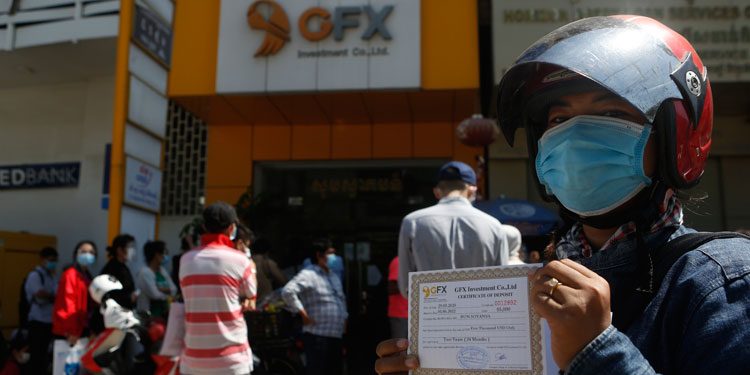 Embattled derivates brokerage GoldFX Investment Co Ltd (GFX) rejected accusations that it would close down its last remaining office in the capital’s Tuol Kork district before courts find “an appropriate solution within the laws and regulations in force”.

“Two groups of perpetrators and factions have been identified in accordance with the procedures of the ongoing investigation. The company asks clients to be patient and allow the judiciary to have sufficient time to perform their duties properly in order to provide justice for all parties involved and provide real transparency to all victims,” the company said in a Khmer language statement.

“The company completely rejects any information that claims the company has a plan to close in the near future which is provocative and fraudulent because the company will continue operating until the customers and the company receive a solution in accordance with legal procedures. At the same time, the company would like to express its gratitude to all customers for their continued participation in activities. The company strongly believes that [GFX] and [its] clients are victims and will definitely get an appropriate solution within the laws and regulations in force,” the statement continued.

GFX received public scrutiny after some 3,000 investors told media that their trading accounts had been drained of funds, with $27 million believed to have gone missing.

The firm initially blamed a technical glitch for the error before retracting the statement and pinning the lost funds on three foreign nationals. It told victims who appeared at its office in Tuol Kork that it had dropped the case against one individual and is pursuing cases against two others.

The firm said that it had filed a formal complaint with Phnom Penh Municipal Court on April 6 accusing perpetrators and their accomplices of having stolen the funds and taken refuge under GFX’s licence.

It said that the Phnom Penh Municipal Court took immediate action and summoned the culprits twice – on April 20 and on May 19.

Khmer Times witnessed a heated standoff between GFX employees and victims on May 31 as investors appeared at the office to have their documents reviewed. GFX claims that only about 50 victims were at the office that day, a figure disputed by victims.

“I was there. It was at least 100 people. It’s difficult to say how many exactly because the day was so crazy, some people showed up and left. Others just saw the chaos and wanted to have no part of it. Saying that only 50 people came is not true,” one victim told Khmer Times. “Maybe they were just considering the people that walked into the office with their documents.”