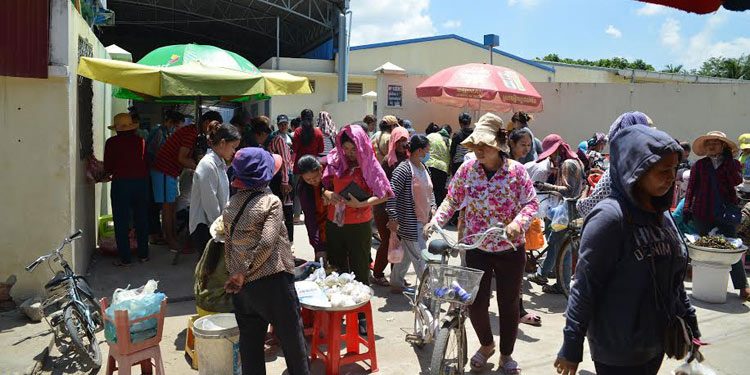 With the Ministry of Labour and Vocational Training’s announcement earlier this week that a total of 130 garment factories have now applied to suspend operations, putting an estimated 100,000 workers out of work and affecting a further 400,000 who are dependents, as the Coronavirus continues to wreak economic havoc, concerns have been raised that social unrest could become a problem in the already struggling economic environment.

While the Government has committed to paying 20 percent of the national minimum wage of laid-off workers’ salaries, a payment of $38, factories have been ordered to cover 40 percent. However, with many factories claiming cash-flow problems due to cancelled orders, that money may be slow to come, leaving many workers – and their dependents – unable to pay for essentials such as food and utilities.

“Garment factory workers earn between $200 and $250 a month on average and the subsidy will barely cover the $90 they normally spend on water, electricity and rent,” he said.

Van David, Senior Associate at the PLATFORM IMPACT, a Public Private Partnership said that Cambodia’s huge informal sector – which is the most negatively impacted by the COVID-19 crisis – should not be forgotten by the Government.

“Let us be reminded that for every formal sector garment factory worker, about five or six informal sector people depend on them for their livelihood – from the food sellers on the roadside to the drivers ferrying the workers to the factories every day.”

The job losses add to those already suffered in many other sectors across the nation. Tourism was the first to be affected when visitors hastily left the country. According to data from the Cambodia Association of Travel Agents, some 630,000 people in the industry have been affected with an estimated 30,000 out of work. The construction sector has also reeled with the loss of 90,000 workers out of its 300,000-strong workforce, according to official figures.

Van David said that social issues could be an issue which is in direct line with rising unemployment rates. “The problem is when people are out of job and going hungry, crime rates may surge as people resort to robberies,” he added.

However, Cambodian government spokesman Phay Siphan has been quick to play down the concern, saying that the government is more than equipped to deal with the issue.

“The Ministry of Economy and Finance has already prepared a budget package to solve the issue phase by phase. The Government has reduced 50 percent of expenditure on infrastructure project investments to have the money to help,” he said, adding that the ministry of Labor and Vocational Training is also promoting new job opportunities for people.

To mitigate the economic shock of the pandemic, the government has also announced a $2 billion reserve budget to help the Kingdom’s economic pillars remain upright and to help ease the financial strain being faced by those who have lost their jobs in the garment and tourism sector.

No flight to export Cambodia mango due to COVID-19