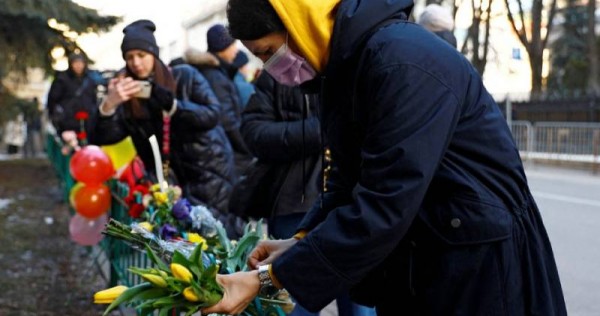 MOSCOW – Alexandra and Anna, both 27, were among a steady trickle of Russians at Ukraine’s embassy in Moscow on Sunday (Feb 27) who voiced shame, anguish and a sense of utter hopelessness after Russia’s invasion, offering heartfelt apologies to Ukrainians.

The friends, who declined to give their surnames, believe their own brothers have been deployed with Russia’s National Guard as part of the invasion following exercises in Crimea, one as a conscript and one as a contractor.

Russia annexed Crimea from Ukraine in 2014 and began a full-scale invasion of its neighbour four days ago, triggering a Western political, strategic, economic and corporate response unprecedented in its extent and coordination.

“I’m categorically against this war and I want it to end immediately. My heart goes out to the Ukrainian people, to those who have died, suffered and who are in the conflict zone,” said Alexandra who works in hospitality.

She left flowers opposite the embassy as the adjacent pavement had been fenced off with barricades and police milled around. Other well-wishers left a “Forgive Us” sign and a cardboard heart in the blue and yellow of Ukraine’s flag.

All those items were thrown away shortly after they left. A police officer told Reuters the flowers were being taken away every two hours so as not to get in the way of passers-by.

It was one of several surreal scenes in a city where police have cracked down on anti-war sentiment.

Almost 6,000 people have been detained at anti-war protests since Thursday, the OVD-Info protest monitor says. There has been a heavy police presence at squares in Moscow since Thursday. The central Pushkin Square was cordoned off on Sunday.

There is no polling information out yet on the public’s view of the invasion, but President Vladimir Putin’s rating is high and a majority is thought to back it. The huge detention tally is unusual though amid an ice age in activism prompted by the crushing of jailed Kremlin critic Alexei Navalny’s network last year.

Foreign residents, some panicking on Sunday, called each other and discussed leaving Russia after Putin’s order to put the nuclear forces on high alert.

Some Muscovites were clearly bracing nervously for the sweeping Western sanctions that are expected to cause mayhem on markets on Monday.

Some ATMs were out of cash in Moscow; in St Petersburg, people stood in long queues to withdraw money. Raiffeisen Bank was selling dollars for 150 roubles compared with 83 when markets closed on Friday.

The US embassy told its nationals they should consider leaving “immediately” due to the increasing number of airlines cancelling flights and countries closing their airspace to Russian airlines. All French citizens on short-term visits to Russia should leave immediately, the French government said on Sunday.

At the Ukrainian embassy, Alexandra said all her friends opposed the war, but that most Russians, including her parents, supported it.

“My parents live in the provinces. They watch television and the propaganda affects them, they are in an information vacuum … We argue every day.”

Anna said she had protested every day since Thursday despite the risk of arrest. She regretted not having supported opposition politicians more in the past who could have helped them mobilise now. She therefore blamed herself for the invasion.

“There is no one to organise us now. They’re all either in jail or labelled extremists … We have missed the moment,” she said. “We are to blame for what is happening. And myself personally.”

Both said they were worried about their brothers in Ukraine. The last the brothers told them was they were being deployed to a new location, but they didn’t know where.

Anna said her brother, an 18-year-old conscript, would neither have been able to critically assess the situation nor legally refuse to serve.

“He’s a boy from a village. He’s never seen (independent media). He’s only seen Channel One (state television). His boss gave him his orders … He’s a conscript, he can’t refuse.”