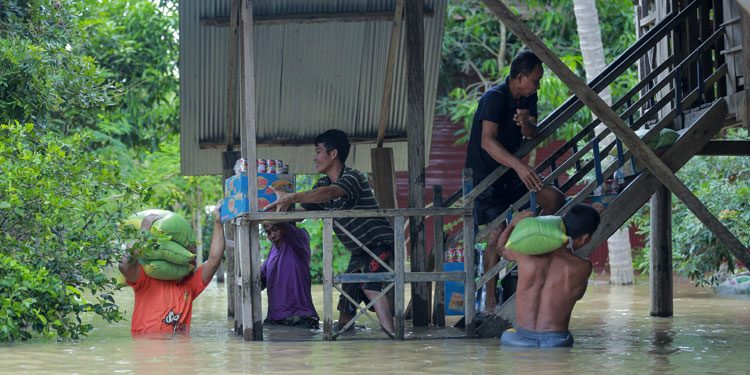 Flooding has created uncertainty over the Kingdom’s economic outlook this year, with various figures bandied about and thousands of households and paddies affected.

However, economists are optimistic that even though the country has been hit by flash flooding, adding to the COVID-19 pandemic and also the partial loss of the everything but Arms (EBA) trade deal with the European Union, there will not be much change in reality.

Before the floods, the government and international financial institutions had different projections over gross domestic product (GDP).

The government maintains economic growth will contract 1.9 percent while global financial institutions have changed views because Cambodia has been less affected by COVID-19 than other countries in the region and, indeed, the world.

The World Bank predicted a contraction of negative 2 percent for this year. ADB has revised its 2020 growth forecast to a 4 percent contraction from its previous prediction of 5.4 percent in June while the International Monetary Fund projects that the Kingdom’s economy is forecast to shrink 2.8 percent this year.

Sunniya Durrani-Jamal, Asian Development Bank (ADB) country director for Cambodia, said it is too early to estimate the total economic impact from the flooding.

However, she said the ADB will issue an economic update in December 2020 and the impact of the flooding will be reflected in this.

“At this stage, the greatest concern is for the safety of the 70,000 affected households and ensuring they are sheltered,” she said. “We also want to stand with the other families that have been affected in Phnom Penh and Cambodia’s 18 other provinces [affected by flooding].”

Sunniya said that the government is doing its best to mitigate possible dire effects by prioritising the safety of those affected.

“I believe a damage assessment will be prepared by the government with support from development partners as requested. After that, the ADB can help to prepare cost estimates for rebuilding if needed. The ADB has also offered to reallocate resources from its existing projects to emergency repairs of flood damage,” she said.

Van David, a senior associate at public-private partnership PLATFORM IMPACT, said the ADB forecast was prepared before the floods and did not consider the heavy toll of damage incurred by heavy rain resulting in several hundred million dollars of losses.

However, he said that the actual growth for all of 2020 remains unsure for now until a new assessment can be made.

“Current flooding certainly caused a lot of collateral damage to the local economy but how much it may affect in percentage terms the actual full 2020 growth remains unclear until adequate assessments have been carried out,” he said.

Hong Vannak, a business researcher at the Royal Academy of Cambodia, reiterated Cambodia is now facing three challenges: the 20 percent loss of the EBA deal, COVID-19 and flooding.

However, he said the issue of flooding will not change the economic outlook much. “The prediction of economic growth is reflected by trade activities, exports and imports and investment inflows but the real damage has been caused by the  COVID-19 pandemic,” he said, adding that with the government’s timely measures to contain it, the outlook has been more positive.

Ministry of Economy and Finance spokesman Meas Soksensan said the government will adjust its projection at the end of the year.

He said the floods added another burden for the government to address urgently. However, the government has yet to make any assumptions on their impact.

“The government has annually reserved a budget package which is allocated for relief from natural disasters such as floods,” he said.

The frequent deluges had affected nearly 70,000 families made up of 245,428 people as of Monday. A report by the National Committee for Disaster Management shows the floods affected 213,289 hectares of paddy, of which 32,382 hectares have been damaged.

17 Telecoms operators in Cambodia have their licences revoked by MPTC