Flood-affected paddies may later suffer shortage of water in Cambodia 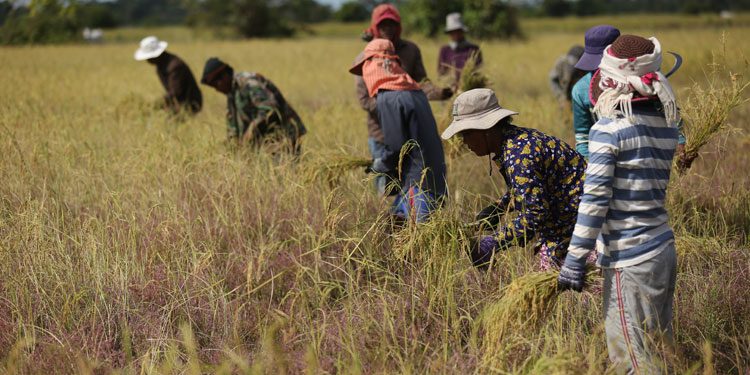 Farmers in some areas may find it hard to regrow their paddy after the floods end because of a lack of water, according to the Minister of Agriculture, Forestry and Fisheries (MAFF).

Agriculture minister Veng Sakhon said currently the ministry has just received requests for rice seed from Pursat province while the floods are ongoing.

He said in the past two weeks the ministry has provided 29 tonnes of seed to farmers and is still waiting for requests from other provinces.

The minister said, however, the main issue after the floods is that some areas will not have enough water for paddy farming.

“Because we don’t have water storage, when the floods end, the water also goes, so we cannot grow paddy in some areas for the next three months,” he said. “We need to closely follow the situation. We cannot just provide the seed without water. We just have a small amount of water storage that is no enough for paddy farming.”

According to Sakhon, more than 50,000 hectares of paddy have been completely damaged and the amount could rise because the floods have not come to an end.

According to the National Committee for Disaster  Management, paddy and other crops
of 270,007 and 88,779 hectares respectively are flooded.

“However, we encourage farmers to grow crops which use less water instead so farmers can meet their daily living needs in the short term,” he said.

The minister said currently the ministry has 1,700 tonnes of seed in stock and another 2,000 tonnes has already been approved by Prime Minister Hun Sen.

“So we are now able to provide 3,700 tonnes in case farmers need more seeds. 100 kilogrammes of short-term, three-month period of seed will be offered to one family free of charge but the amount could be more than this depending on total damage and farmers’ demands,” he said. “We will release some money to buy seed from local producers in case we need more. We have enough seed for farmers.”

Chok Thoeun, president of the organic rice community Boeng Leach Sambophal in Kampong Chhnang province’s Samakky Meanchey district, where more than 10 hectares of paddy fields out of the community’s total of 30 hectares was damaged by flooding, said
that farmers has already told the level of damage to the provincial Department of Agriculture, requesting different rice varieties, but so far has had no response. He said with the total damage, the community needs about one tonne of seeds of fragrant rice varieties.

However, he said the request is not for growing it this year because the area can only be cultivated once a year because of a lack of water in the dry season.

“Here, we don’t have an irrigation system to store water for use in the dry season so we asked for seed for next year’s season,” he said. “Flooding has damaged almost half of the rice here and, when the water recedes, we have no channel to store water.”

Mr Hun Sen yesterday called on all relevant ministries to immediately assess and restore the damage caused by floods, including roads and the agriculture sector.