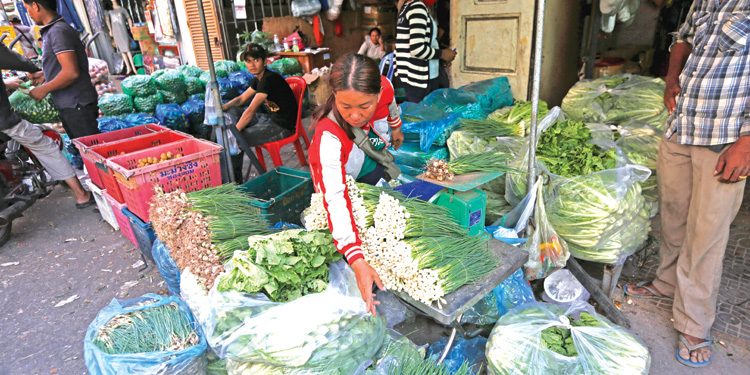 Since the COVID-19 pandemic began there has been widespread fear that food prices may rise but recent figures show they have remained fairly stable for most food commodities over the past seven months.

Although largely static there has been a spike in some prices, particularly for vegetables with up to a 60 percent rise for some. Eggs also saw a rise of 14.5 percent and so did pork with a 5.7 percent increase at the end of March and beginning of April. This is being put down to the increase in COVID-19 cases as well as border closures which restricted cross-border trade. Other food commodities such as rice and fish remained stable during this period while vegetable oil has had a downward trend for the last two months.

In June, prices seem to have stabilised on most commodities except a few vegetables such as morning glory, also known as water spinach, which have seen major fluctuations, although this has started to reduce and looks as though the fluctuations may be down to seasonal factors.

Price fluctuations stayed the same in both rural and urban areas for key commodities and their direction of price changes followed the same trends except for pork and fish.

As expected more remote provinces and mountainous areas such as Koh Kong and in the north and northeast had higher price rises on key commodities such as rice, eggs, fish and vegetable oil.

Markets have continued to function well throughout this period too. At the end of June, figures show that 11 percent of market chiefs reported a slight decrease in customers visiting markets but parallel to that 6 percent considered there to be a major increase in customers.

In late June, there was a major improvement as 94 percent reported no problems with supply although 6 percent had trouble mainly because of price rises from their sources and a decrease in supply.

In conclusion, although there was a spike in retail food prices for some commodities in late March and early April by the time it got to June much of the fluctuation had reduced and prices stabilised.

Markets also appear on the whole to be functioning well, even with some new cases of COVID-19 between May and June.

So far, the impact of the COVID-19 pandemic on food security is more likely to come from the demand side, with more households suffering economically. More people are losing their livelihoods and income because of the virus which in the end restricts them from being able to afford diverse nutritious foods.

WHO acknowledges ‘evidence emerging’ of airborne spread of Covid-19