Exploring what makes the insect market the big business 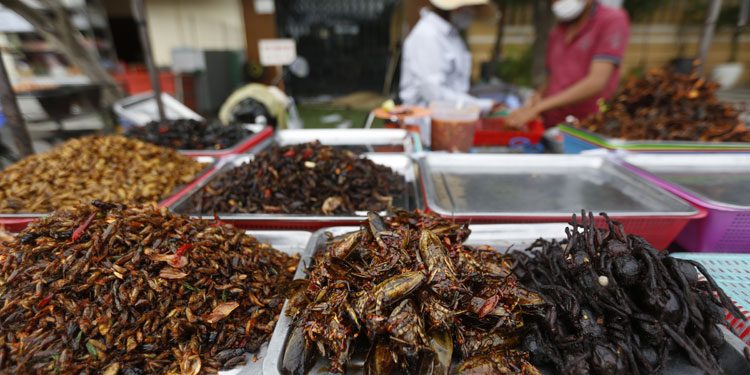 The term can mean anything from silkworms, crickets, grasshoppers and red ants to tarantulas and even water snakes. The former is usually measured out in portions per can costing around $0.75, with the larger latter sold separately at $1.50 or more.

But don’t be fooled, these little bugs are big business.

According to a report from Graphical Research, the edible insect market in the Asia-Pacific (APAC) region will exceed $270 million annually by 2024.

“The APAC market demand from protein bar applications alone is set to register significant gains at more than 44 percent over the same time frame,” it added.

It also said the growth in the market is down to a number of factors.

“Cricket-based protein products are healthy snacks because they are easily digestible and provide various health benefits. [Bug products] are widely recognised as a dietary food supplement and used in biscuits and breads, desserts, smoothies, protein bars and more, which drives the overall market.”

The report continued: “Insect farming is inexpensive, non-toxic, non-hazardous and environmentally friendly. These products could also be beneficial for replacing meat and poultry consumption, all of which further stimulates the edible insects market demand.”

A study by the Public Broadcasting Service agreed.

“Bugs are cold-blooded, which makes them much more efficient in converting energy to protein because there is no wasted heat. In comparison to cows, bugs don’t use anywhere near as much water and more than 1,700 species of insects have been identified as edible,” it said.

“A big advantage of eating insects is that they are generally healthier than meat. A six-ounce serving of crickets has 60 percent less saturated fat and twice as much vitamin B12 than the same amount of ground beef,” it added.

In Cambodia, Phnom Penh based social enterprise Eat Criche – which specialises in cricket products – says it believes an insect revolution will save the planet from malnutrition and climate change.

“On average crickets produce almost 3,000 times fewer greenhouse emissions than red meat. Also [they require] 12 times less feed, use 200 times less land and 22,000 times less water. Even compared with plant-based proteins, crickets are so much better for the environment in their impact. Crickets are low-fat while being rich in protein, fibre, iron, zinc, vitamin B12, omega-3, calcium and nine of the essential amino-acids,” it added.

“Our value proposition is making healthy and sustainable sources of protein accessible to many in a new and more appealing way. We help people have a complete and efficient diet without regular meat and dairy products, providing a complete set of vitamins and minerals towards a world without malnutrition.”

“We use Cambodia’s local resources to sustain farmers and the economy, leading the country to be a strong player in the international market of future food.

Indeed, the future of entomophagy – the eating of bugs – offers more than just a roadside snack or a drunken dare for Western backpackers.

Social enterprise Changrit Kamleang partnered with the non governmental organisation Angka Changrit Kampuchea (ACK), to support the rearing, selling and eating of crickets as a delicious, affordable and healthy solution to poverty and malnutrition in the Kingdom of Cambodia.

It said the impact of investment in the cricket sector will allow it to increase the availability of nutritious food for thousands of people in Cambodia , and ensure the alleviation of hunger and improvement of health.

It said it will also accelerate local entrepreneurship, employment and income generation for hundreds of farmers and co-workers at processing centres all while reducing the environmental load compared to other forms of protein production resulting in less waste, greenhouse gas and loss of space.

“Regional cricket knowledge centres in Cambodia will guarantee knowledge transfer and stimulate further dissemination of cricket production for nutritious food for low income consumers and commercial processing centres, inside and outside of Cambodia. The inclusive model of ACK allows people with the lowest income within the regions to be actively involved as producer, a salesforce or consumers, allowing them to benefit from economic development while simultaneously improving local food systems,” it added.

As creepy-crawly products’ economic and social potential impact continues to turn heads, stakeholders have also begun to work on marketing in an attempt to stop bugs turning stomachs.

In 2017, the Nordic Food Lab released a bug cookbook “On Eating Insects: Essays, Stories and Recipes”, a book product was by the non-profit self-governed institution’s Insect Project, founded in 2013 with the aim of exploring why the Western world doesn’t eat insects.

Head of culinary research and development at the Nordic Food Lab Roberto Flore said the point of the project was to showcase the range of ways to prepare, cook and enjoy bug dishes in a way that psychologically connects the food with its eaters, something he said is essential to change the stigma towards insect consumption, especially in the West.

However, Forbes said that regardless of Western resistance to bugs, consumption of them may be inevitable.

“It is estimated that Americans already consume an average of two pounds of insects a year because of US Food and Drug Administration guidelines for the allowable levels of insects per food category. Moreover, companies such as Pepsi have already stated that they are planning for consumer preference horizons that include the acceptance of bug proteins. Most notably, the company recently stated that it has started experimentation around using mealworm powder in its products.”

Indeed, Food Navigator reported that Thailand published the first ever Good Agricultural Practice (GAP) in relation to cricket farming in 2019, Germany’s SENS Foods and its Thailand-based farm business, The Cricket Lab, have raised $2.1 million in funding to help further automate and launch new products in the market in 2020, evidencing continuing development within the sector.

This article was first published in Khmer Times. All contents and images are copyright to their respective owners and sources.
Tags: Cambodiainsect marketPhnom Penh
Previous Post