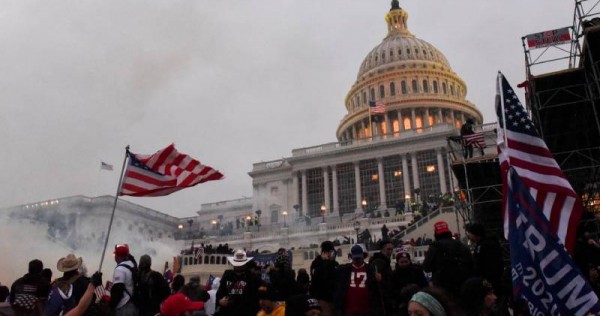 WASHINGTON – A former Virginia police sergeant who joined Donald Trump’s supporters in storming the Capitol on Jan 6, 2021, was sentenced to seven years and three months in prison on Thursday (Aug 11), a Justice Department spokesperson said.

A jury in April convicted Thomas Robertson, a former police sergeant for the town of Rocky Mount, Virginia, of six criminal charges, including obstructing an official proceeding and obstruction of justice.

Prosecutors had asked US District Judge Christopher Cooper to sentence Robertson to eight years – the longest amount yet for any Capitol riot defendant – on the grounds that Robertson abused his position of trust as a law enforcement officer.

Both Robertson and Guy Reffitt, an associate of the far-right Three Percenters militia who also received a sentence of seven years and three months earlier this month, are now tied for the longest sentence to date for any Capitol riot defendant.

Thousands of Trump supporters stormed the Capitol on Jan 6, in an attempt to overturn his election defeat, which Trump falsely claims was the result of fraud.

Robertson’s defence attorney had asked for a sentence of no more than 15 months.

He has been in detention since last year, after the judge found he violated court orders and continued to purchase what prosecutors described as an “arsenal” of guns online.

FBI agents also found a loaded M4 rifle and a partially assembled pipe bomb at his home during a search.

Robertson’s trial featured testimony from Jacob Fracker, who had reported to Robertson on the police force, who entered the Capitol on Jan 6, 2021, with Robertson where they took selfies together.

Prosecutors said Robertson later destroyed the cell phones they had used that day.

Fracker, who co-operated with the Justice Department, pleaded guilty to a felony charge of conspiracy in March, and is due to be sentenced on Aug 16.

In exchange for his co-operation, prosecutors are asking the judge to sentence him to six months’ probation with a condition of community confinement or home detention.

Prosecutors said Robertson “anticipated violence” on Jan 6, and he packed gas masks for himself and Fracker, as well as military food rations, water and a large wooden stick.

In a letter to the judge, Robertson said he takes “full responsibility” for his actions on Jan 6, and said he was “exposed to lots of pro-Trump, anti-Biden media” while he was passing the time in 2020 with a cancer-stricken friend.

He drank to cope with stress, he said, and fell deep into the “rabbit holes of election conspiracy theories.”

However, he denied ever having “any intention to disrupt Congress” and claimed that Fracker actually destroyed the cell phones, and later lied to the FBI and the court about it.