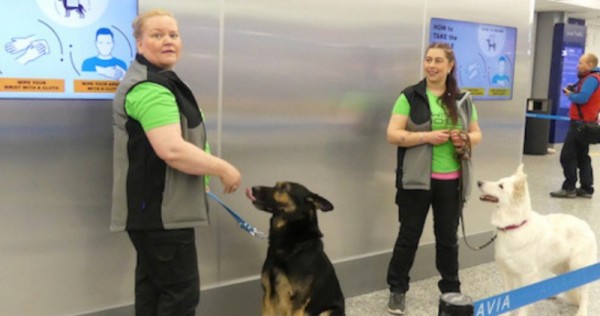 New studies have contributed further evidence that sniffer dogs can detect Covid-19, suggesting that canines could play an important role in screening people at airports and other major travel hubs.

A recent study led by the national veterinary school of Alfort in France found that dogs can sniff out samples of clothing from infected people with between 76 per cent and 100 per cent accuracy.

And this week officials in the United Arab Emirates said that a trial involving 1,000 samples showed a 98 per cent correlation between lab testing for Covid-19 and detections performed by sniffer dogs. The latter study is yet to be peer reviewed or published in a journal.

Dogs have been proven to detect other diseases, including malaria and certain cancers, via their heightened sense of smell, leading researchers in several nations to explore Covid-19 detection. A previous study led by Alfort researchers found an overall detection success rate of 95 per cent.

Abdullatif Al Shamsi, president of the Higher Colleges of Technology which oversaw the UAE study, said that dogs can detect samples within seconds, greatly reducing time and resources involved in travel screening.

“This key scientific achievement will save efforts and funds and reduce the pressure of the medical cadre and screening center visitors,” Al Shamsi said.

The UAE has already run pilot programs at airports using Covid-19 sniffer dogs, as have authorities in Finland after a study from the University of Helsinki showed dogs to be close to 100 per cent accurate at detecting Covid-19.

The French study, which was published in the journal PLOS One, involved six dogs with different training backgrounds, including explosives detection, search and rescue, and cancer detection.

The dogs received between one and three weeks of Covid-19 detection training, and some of the dogs were able to discriminate between samples taken from Covid-19 positive and negative individuals with 100 per cent accuracy.

The researchers said their trial was a proof-of-concept study, and recommend that dogs are trained for longer periods of at least eight weeks.

The study, which is being led by Medical Detection Dogs and the London School of Hygiene and Tropical Medicine, has elected to use dogs with no prior detection training in other areas, as outcomes are generally better when dogs specialise.

The project has received funding from the UK government and the team is in talks with Heathrow and Gatwick airports in London about using the dogs to screen travelers arriving in the UK.

In addition to helping identify those who need to be tested, dog detection programs could provide valuable data for local and overseas public health authorities.

For example, if detector dogs at an airport establish that a certain number of passengers on a plane from a particular destination have the virus, this information could be used to identify emerging hotspots and help prevent the rapid spread of Covid-19.

People over 60 almost 20 times as likely to die of Covid-19 as young people: Study