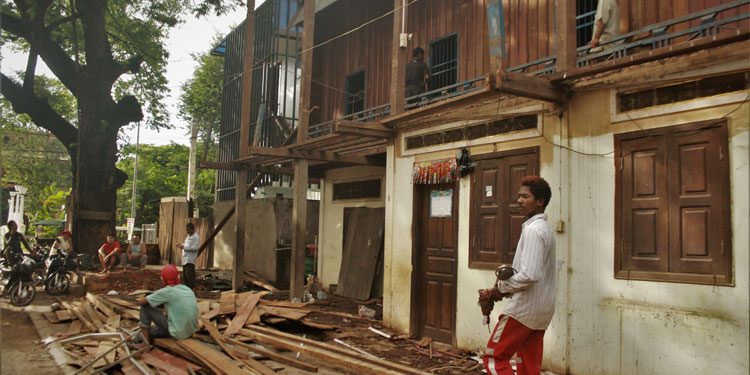 Siem Reap residents have expressed conflicting views as work starts on the $150 million construction of 38 new roads in Siem Reap province, causing business owners to have to demolish parts of their property or close their businesses entirely.

People are compelled to dismantle terraces, awnings and other structures in Siem Reap to make way for road expansions. For some, this will mean tearing down large chunks of their homes and businesses they say they have rights and titles to and on which they depend to earn their livelihood.

While there have been no report of protests, residents say they did not have much time to clear space for the road expansion works, after the government gave notice on September 23.

Reports from some local business owners are that the area now looks like a ‘war zone’ and that the government has chosen the wrong time to go ahead with the project as businesses are already struggling due to the COVID-19 pandemic.

One business that has had to close completely is Jaya House, an award-winning hotel that unfortunately finds itself in the way of construction.

Its Managing Director, Christian de Boer said in a statement: “In accordance with the government instructions to beautify Siem Reap, the road in front of our hotel will be expanded and widened.”

“The project is inclusive of a cycling lane and footpath which is fantastic. Unfortunately, this also results in the loss of space for Jaya House River Park, Siem Reap and our driveway amongst other areas. Given the deadline, which we will, of course, adhere to, we see no other choice but to close our hotel and re-think the Jaya House experience.”

Other small business owners such as street corner coffee shops and tuk-tuk bars also have to close down their businesses because of the situation, causing them to lose their livelihoods.

However, not all businesses are having to close as  most businesses are just dismantling parts of their property to adhere to deadlines set out by the government.

Residents have stressed that this is at a time when people do not have a lot of disposable money to pay for construction work. Other residents have brought up the possibility of crime rates going up as many properties are having to take down the gates that protect their properties.

Some residents have made their opinion clear on social media with some comparing the situation to ‘the next Sihanoukville’.

Opinions do seem to be mixed though as other residents have expressed gratitude for being able to have used the land.

Ahmed Raees, owner of a restaurant named Wine O’clock said: “In November 2019 we received an official-looking letter about the land. We saw our neighbours start to remove awnings and outside seating so we removed our outside terrace. A month or so passed and nothing happened so we rebuilt the terrace as it generates  a lot of income. Then recently we saw construction start. It has been very challenging for us, but we like to look at it differently than other businesses that have been complaining.”

“For us, we see it as a blessing that we’ve been allowed to run a part of our restaurant on state-owned property. We are very thankful to the government for the time that we have had. The only problem is it happened too  fast. However, we see a bright future with a slightly smaller café but a beautifully finished road.”

Other residents have argued that now is the time to do the work as Siem Reap is seeing a lot fewer tourists.

Siem Reaps provincial hall spokesperson Sok Thol said it was a good time for the expansions because there were not many  tourists now, as such works will not hinder them.

“When they come back, we will  already be done,” Thol said.