Directive on the implementation of the Better Factory Cambodia (BFC) issued 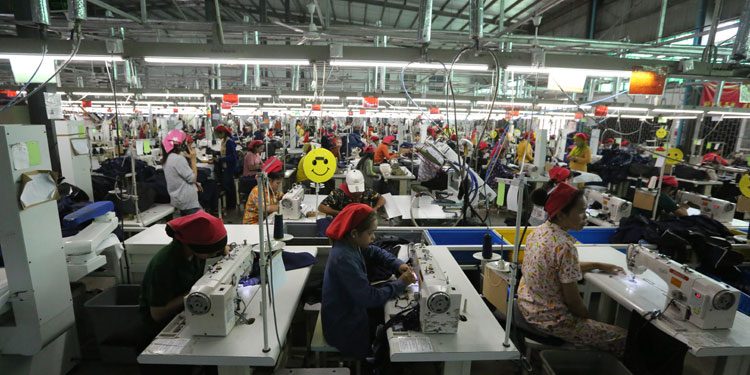 The Ministry of Commerce together with the Ministry of Labour and Vocational Training has issued a joint directive on the implementation of the Better Factory Cambodia (BFC) project in export-oriented factories in the textile, garment and travel goods and bags sector.

The directive, signed by Minister of Commerce Pan Sorasak and Labour Minister Ith Samheng on Oct 27, was released on Tuesday.

The purpose of the directive is to encourage factories, enterprises and sub-contractors in the textile, garment, and travel goods sector to become members of the International Labour Organization (ILO)-BFC.

This will contribute to building the economy and improving the competitiveness of the Kingdom through assessment of the implementation of working conditions in factories and enterprises based on labour, union representation, minimum wage, National Social Securities Fund (NSSF) laws as well as other internationally recognised regulations.

The directive adds that factories, enterprises and sub-contractors in the sector must make financial contributions towards supporting the Better Factory Cambodia project through the Garment Manufacturers Association in Cambodia (GMAC) in order to attain eligibility to become members of the ILO-BFC.

“Only those registered with the BFC project in Cambodia will be eligible to register for exports under the Generalised System of Preferences (GSP),” according to the joint statement.

Kaing Monika, deputy secretary-general of GMAC), said the joint prakas of the government will ensure continuous improvement in working conditions in line with the government’s labour-linked trade policy.

Therefore, he added the government requires all travel goods factories to be ILO-BFC members. Compliance in these factories to labour laws and standards will also be regularly audited and reported publicly, the same as in the garment factories.

Monika added that the ILO-BFC project has been in place in Cambodia since 2001, the result of the US-Cambodia bilateral textile agreement signed in 1999. The agreement made Cambodia the first country linking commitment on working conditions to its international trade policy. Since then, all garment export-oriented factories are required to participate in ILO-BFC monitoring.

“In 2017, Cambodia received GSP eligibility for exporting the travel goods to the US and, as an example of Cambodia’s commitment to bolster working conditions, we decided to put the travel goods sector under the inspection of the ILO-BFC project as well,” said Monika. “With its competent technical capability and credibility, BFC has expanded the scope of its coverage from garment to include travel goods as well”.

He said the BFC project was a goal of the ILO, a specialised arm of the United Nations, which is recognised as an independent auditor and assessor. Therefore, the implementation of this project is to inspect working conditions at the factories and release reports. If examples of non-compliance are found, factories are required to undertake corrective actions.

According to the GMAC, Cambodia has exported more than $5.8 billion of garments, footwear and other textiles in the first seven months of this year, down around 3 percent for the same period last year. The Cambodian government has been preparing five-year development strategies for the garment, footwear and bags sector (2020-2025) to promote their competitiveness and added-value, according to the Ministry of Economy and Finance (MEF).

The government’s strategy on garments is aimed at setting common development directions, increased independence and strengthening the appraisal and stability of the garment, footwear and bags sector to further promote its sustainability and environment, the MEF said.

Athletes arriving for Tokyo Olympics do not have to isolate, organisers say