Did Myanmar release 4 foreigner prisoners as ‘tactic’ to ease pressure from Asean? 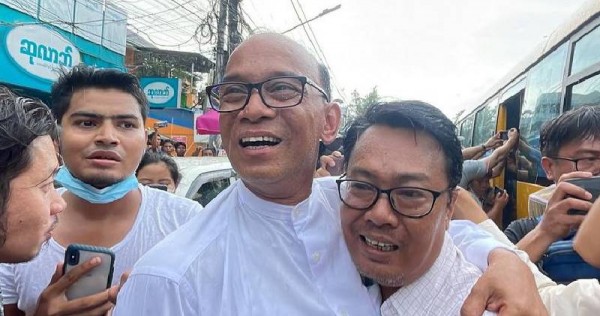 Myanmar’s recent mass release of prisoners is aimed at relieving growing regional and global pressure, analysts say, especially amid concerns that Indonesia might take tougher measures against the junta as the new chair of Asean.

The military government on Nov 17 released nearly 6,000 prisoners, including several foreign nationals, as part of a broader amnesty to mark Myanmar’s National Day, according to the country’s state-run media.

Their imprisonment caused friction between Myanmar and the respective countries.

The pardons came amid a flurry of diplomatic gatherings in Asia that Myanmar’s military leaders were barred from attending.

Last week, world and regional leaders met in Phnom Penh during the Asean Summit, the G20 meetings in Bali and the Apec summit in Bangkok.

Philipp Annawitt, who served as an adviser to Myanmar’s parliament and government from 2015 to 2021, said the prisoner release was a “symbolic but disingenuous conciliatory move by the junta designed entirely to relieve international pressure from the regime in the short term”.

He added that the junta was reacting to increasing pressure from Asean members, especially Malaysia and Indonesia, “to get tougher with the junta” and to engage the National Unity Government (NUG) more seriously.

The NUG is the Myanmar government-in-exile formed by elected lawmakers and members of parliament ousted in last year’s military coup.

Sam Baron, an analyst researching Myanmar’s foreign policy at The University of Tokyo, said high-ranking officials from Indonesia had made a number of statements suggesting they would take a harder line on junta leaders.

The increasing number of crimes committed by the regime, such as the recent air strike of civilians attending a concert in Kachin State, is also prompting further action from the international community “that may be forcing the junta’s hand”, Baron added.

At least 80 people died and more than 100 were injured at the music festival after a military air raid in the northern state last month. It is believed to be the single-worst air attack since the military seized power.

The incident prompted worldwide condemnation from foreign governments and right groups, including an open letter from almost 300 groups and organisations to the US calling for concrete action from Washington such as restricting the junta’s access to funding, jet fuel and arms.

Baron noted that Myanmar was recently added to the blacklist of global watchdog Financial Action Task Force (FATF), which coincided with the continued decline of the Myanmar economy.

“[This] could mean that the junta is posturing to remaining foreign investors that it is willing to take the actions necessary to loosen pressure and create a better operating environment for companies,” Baron said.

Last month, the FATF added Myanmar to the list, citing the country’s failure in addressing illicit financial flows, a move which could severely affect the junta’s ability to participate in international financial transactions.

According to a World Bank forecast, Myanmar’s GDP shrank by 20 per cent last year and its economy will remain sluggish and stagnate this year, while the International Labour Organisation also reported 1.6 million jobs were lost in 2021.

Baron said the junta also faces a waning supply in its military resources, noting that apart from recent efforts in diverting civilian fuel jet to the military, it had also used civilian ships donated by South Korea and Japan for humanitarian purposes as battleships in direct combat.

Annawitt warned the release of the prisoners is expected to “strengthen the hand of the junta’s friends in Asean”, including Cambodia, the current Asean chair.

He said that in a proposal leaked before the Asean summit, Phnom Penh suggested the junta should be engaged based on their “own five-point plan, which centres around the junta’s plans to hold a sham election in 2023”.

Noting that Cambodia was quick to welcome the prisoners release, Annawitt said “it has become quite clear… that Cambodia, and probably some other members, lean towards allowing the junta to try and extricate itself from international isolation” through the elections.

Asean’s Five Point Consensus called for an immediate end to violence and discussions involving all stakeholders but these have been ignored by the junta.

Analyst Htwe Htwe Thein, an associate professor at Australia’s Curtin University, said the proposed August 2023 election would be controlled and stage-managed by the military.

“The international community has to be vigilant in scrutinising what will almost certainly be a sham election process and deny lending any legitimacy to an election where citizens and political opposition will not and cannot participate freely,” she added.

“The junta is desperately in need of support and recognition from its Asian neighbours,” Htwe Htwe Thein said, adding that with the prisoners’ release, “the junta is trying to gain some breathing space, especially regionally”.

Since the February 2021 coup, the junta has released batches of political prisoners on three separate occasions, noted Baron who is also a policy fellow at the Yokosuka Council on Asia-Pacific Studies.

While last week’s amnesty is good news for the families of those detained, Baron said that almost 13,000 political prisoners remain in jail.

“The move is not a signal that the military is changing its ways, but rather a political tactic that the junta hopes will prevent further punitive actions against them,” Baron said, adding that the use of political prisoners such as Turnell and Bowman was a “tried-and-true tactic” of the junta to gain concessions from Western governments.

Curtin University’s Htwe Htwe Thein said the decision on who to release is “often arbitrary, personality-driven and not necessarily based on consistent and rational principles”.

“We also don’t know under what conditions they are released, especially for local prisoners, as they can be rearrested anytime,” she added.