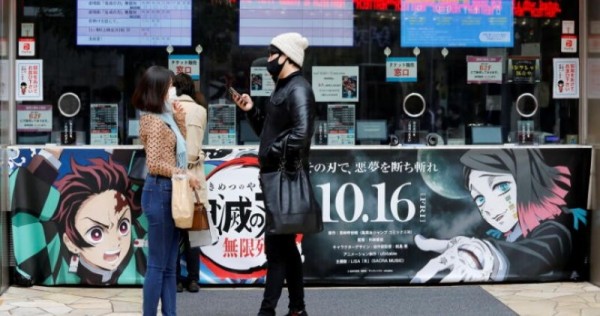 TOKYO – The tale of a boy fighting human-eating demons which murdered his family, Demon Slayer is poised to become Japan’s top-grossing film ever, thanks to a boost in fan numbers due to the coronavirus pandemic and its message of resilience.

Based on a popular manga and TV anime series, the film has spun off an industry of related merchandise and has won over fans with its nod to Japanese traditions people fear are missing today.

“People in high positions act according to that – ‘Noblesse oblige’, samurai and so on. Those at the top become a shield for weaker ones, using their strength to protect them,” said movie commentator Yuichi Maeda.

According to data on Monday (Dec 14), the film – whose full title is Kimetsu no Yaiba – Mugen no Resshahen and was released on Oct 16 – has taken in a total of 30.28 billion yen (S$390 million), within a whisker of the 30.8 billion yen for Spirited Away, by Studio Ghibli’s Hayao Miyazaki.

It has already opened in a few Asian nations and will head to the US and Canada early next year.

The Demon Slayer manga series, running from 2016 to 2020 in a magazine and published in a series of books, has sold over 100 million copies of the first 22 books. Fans lined up for the 23rd volume when it went on sale earlier this month.

But the impact hasn’t stopped there, said Mr Toshihiro Nagahama, senior economist at the Dai-Ichi Life Research Institute, who estimated an economic impact of at least 270 billion yen as of Dec 3.

Of that, some 130 billion yen was in related goods such as toys, with a sword released by Bandai Namco Holdings – which has also produced a “Demon Slayer” series of its long-running Tamagotchi hit – flying off store shelves.

A less obvious winner is Dydo Group Holdings, whose Demon Slayer themed canned coffee has proved so popular it revised up its profit forecast this fiscal year to 2.5 billion yen from from 500 million yen.

Sony Corp, whose music unit is co-distributor, has also gained a boost.

Although the movie’s opening was pushed back due to the pandemic, the delay worked to its benefit as parents, stuck at home during Japan’s soft lockdown in spring, heard about the franchise from their children.

With time on their hands, they read and binge-watched the series on streaming services.

“This got the whole family interested, it was something they could talk about at home,” said Yuka Ijima, an assistant professor at Daito Bunka University.

Prof Ijima noted that demons first appeared in Japanese folklore as a symbol of disease, and said the story’s message was resonating with audiences.

“Overall, it’s about resilience, about overcoming terrible things and the strength to do that,” she said.

That message is similar to Spirited Away, when a girl finds herself on her own after her parents are transformed into pigs, said Prof Kaoru Endo, a sociologist at Gakushuin University – but with a crucial difference.

“I think the meaning is less that we have to fight to overcome things than it is that just living is fine,” she said.”Just living through tough situations is enough – and this is helping everybody right now.”

“There are many people suffering in the current situation,”said office worker Yohei Suzuki, 38. “I don’t think the story was intentionally made for these people but it … could cheer people up.”