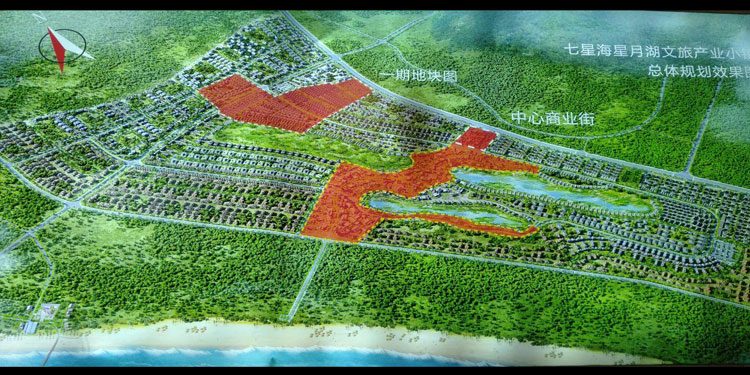 Dara Sakor City Development Group has officially launched the sales project of the Stardream Lake Tourism Town in Dara Sakor. The resort, tourism and entertainment project is licensed by the Cambodian government.

He said the group thoroughly considered the effect on the environment and the lives of local people for its main development. Dara Sakor is a 360 square kilometre L-shape development located along the southwest coast of Koh Kong province, which lies along the Gulf of Thailand.

“This is the opening project and focuses on luxurious residential living,” said Mengchen, who added there would also be a commercial zone.

He added the design of the whole project, the architecture and house plans will be developed by a leading architecture company. “At present, the new generation pays much attention to health and nature, so this project will bring them close to natural land, sea and a natural lake.

Mithona Phouthang, governor of Koh Kong province, welcomed the launch of the sales project. She said Koh Kong has potential and is rich with natural resources for the  development of tourism.

“At present, a lot of companies are investing in the province. The largest company in this province is Union Development Group (UDG). It is investing on the Dara Sakor Resort, golf course, deep-sea port and international airport – which is ongoing and will be completed soon,” Mithona said.

Pak Sokhom, a secretary of state at the Ministry of Tourism, said he appreciated the Dara Sakor City Development Group for its effort in developing new tourism products in the city by bringing socio-economic development to Koh Kong province.

Through the official launching of the sale project, it will increase investment and the numbers of local and international visitors keen to visit and relax in the area.

Sokhom said this project will create jobs and income for locals and people across the country. The development of luxurious villas, apartments and borey communities alongside eco-tourism, which is now big in Cambodia, will contribute to the overall development of the tourism sector in Cambodia.

The Stardream Lake Tourism Town covers an area of 248 hectares within the Dara Sakor City Development. The net sales area of the town is 162 hectares. The remaining area will be reserved for other development purposes while maintaining its natural attractions such as lakes, a hill and a park.

Investors and businessmen can also buy land to build villas, hotels and casinos. Plots  can be sold from 90 square metres (sq m) up to 300 sq m on 99-year leases. The project site is 500 metres from the sea.

UDG invested in the development of a resort in Botum Sakor and Kiri Sakor districts, Koh Kong province. It is a  company registered at the Ministry of Commerce of Cambodia and its projects are approved by the Council for Development of Cambodia.

This group is a privately owned enterprise established in 1995 in the city of Tianjin, near Beijing, that specialises in real estate development.

Trump declares himself immune from Covid-19, prepares for return to campaign trail