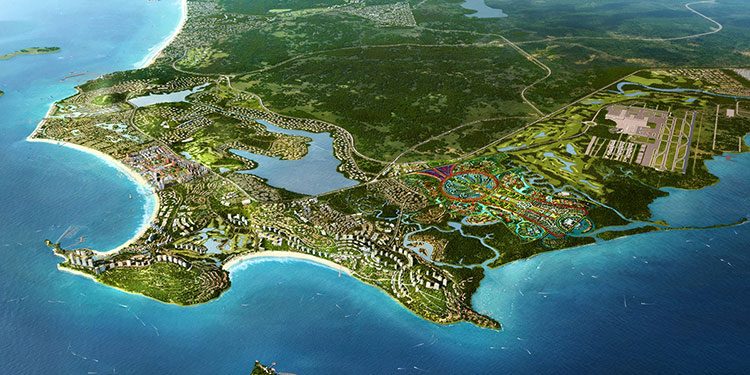 ‘After more than ten years of development and construction, the project has begun to take shape, and has been highly recognised by the governments and people of both China and Cambodia, we have established long-term and good cooperative relations with the Cambodian government and its people’

Chinese enterprises, fully dedicated to the Belt and Road Initiative (BRI), have helped build a large number of roads, bridges and other signature infrastructure projects across Cambodia, bringing hope and improvement for the socio-economic development of the Southeast Asian country.

As some Western countries led by the US take a suspicious attitude and even seek to undermine goodwill from China when it comes to regional joint-development citing the so-called issue of human rights and democracy, they are actually doing nothing but holding back Cambodia’s development by slinging mud to the BRI, which is only to serve their own political needs, experts told the Global Times.

Dara Sakor integrated resort, a comprehensive investment and development pilot zone approved by the Cambodian government, is fully compliant with local laws and regulations and has made a positive contribution to the socio-economic development of the country, a senior executive of Coastal City Development Group Co, the project developer, told the Global Times in a recent interview.

“After more than ten years of development and construction, the project has begun to take shape, and has been highly recognised by the governments and people of both China and Cambodia, we have established long-term and good cooperative relations with the Cambodian government and its people,” the executive said.

Taking the Say Phuthang Road as an example, it is a high-grade road in the large area of Dara Sakor integrated resort, which has nearly 300 kilometres of roads of various grades under construction.

“The official opening of the road has filled the gap in the land connection between Dara Sakor, surrounding areas and the outside world. It has brought convenience for the people along the road to travel, in addition to practical economic and social benefits,” the executive said.

Although the Dara Sakor project pre-dates the BRI by five years, it is aligned with the BRI’s core values, particularly with Cambodia being a major participant in the initiative. The project was included on the lists of “Key Projects of Production Capacity and Investment Cooperation” jointly signed by China’s National Development and Reform Commission and the Council for the Development of Cambodia in 2016.

In 2020, the US government sanctioned the Chinese developer Union Development Group Co (UDG) under the Global Magnitsky Human Rights Accountability Act due to the project’s connection to human rights abuses.

A spokesperson for the Chinese Embassy to Cambodia responded to the sanctions, condemning the US for imposing sanctions on a Chinese firm in Cambodia, saying that the US is violating the firm’s legitimate rights and Cambodia’s sovereignty.

“The US sanctions citing domestic law is a blatant hegemonic act. The US suppression of the legitimate investment of a Chinese enterprise in Cambodia has not only harmed the lawful rights and interests of the company but also trampled on the sovereignty of Cambodia,” said the spokesperson.

“The smearing of the BRI by the West did not happen today, it has always been there, and it is based on their political needs. With slandering used as a bargaining chip in asking prices locally, the US has deliberately damaged China’s image in local people’s hearts and has hindered the advancement of the project,” Xu Liping, director of the Center for Southeast Asian Studies at the Chinese Academy of Social Sciences in Beijing, told the Global Times on Wednesday.

The port and airport projects within the Dara Sakor integrated resort match with local needs to improve people’s livelihood, which will obviously enhance the country’s logistics and transportation and promote the development of the regional economy after completion, Xu said.

BRI projects in Cambodia, including the construction of the Phnom Penh-Sihanoukville expressway, the new Siem Reap international airport, the national stadium, and the Sihanoukville Special Economic Zone (SSEZ), among others, have provided tremendous benefits to Cambodia’s economic development amid the COVID-19 pandemic, the Xinhua News Agency reported, citing a Cambodian government official last year.

Chinese investment in Cambodia increased significantly in 2021 despite the negative effect of the COVID-19 pandemic, which truly reflected Chinese investors’ trust in Cambodia’s business environment.

Cambodia attracted a fixed-asset investment of $2.32 billion from China last year, up 67 percent from $1.39 billion year-on-year, according to a report from the Council for the Development of Cambodia. China remained the top foreign investor in the Southeast Asian nation, accounting for 53.4 percent of the total investment worth $4.35 billion in the kingdom approved last year, the report said.

The trade volume between Cambodia and China was valued at nearly $11.2 billion in 2021, up 38 percent from 2020, official data showed.

“With the RCEP free trade agreement now coming into force and the favourable policies of the CCFTA, as well as Cambodia’s new Law on Investment coming into effect, it will provide greater convenience and tax-free benefits for investors seeking opportunities in the kingdom,” said the Coastal City executive. Global Times