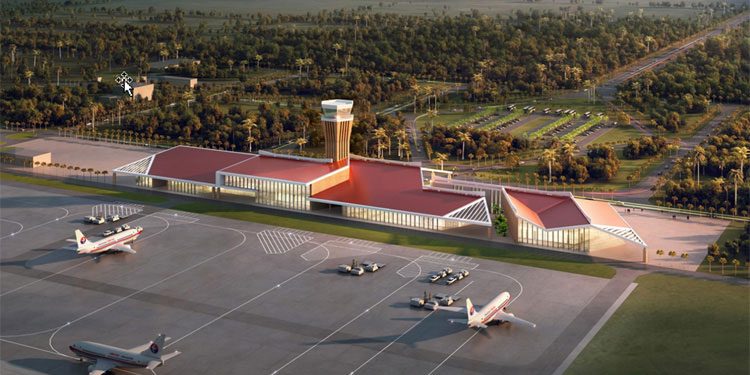 Dara Sakor International Airport, in Koh Kong province’s Botum Sakor district, is set for flight trials earlier next year as the whole construction process is close to completion. The trial will lead to commercial flight service to commence and contribute to the travel of air passengers to the province.

This development was made known by  representatives of Dara Sakor International Airport Construction Company, the firm that invested in the airport, during a meeting with Thong Khon, Minister of Tourism on Saturday.

The whole construction is about 95 percent completed, the company said adding that the works related to terminal building is on-going and the company will accelerate work to complete the terminal  by the end of this year.

“The flight trials are set to be made in January or February next year, so that the firm will be able to contribute to handling  air passengers to the Dara Sakor Resort in line with the government to reopen jabbed tourists,” the firm affirmed to Khon in the meeting.

“The airport will be ready to commence commercial operations in mid-2022 and the terminal building is capable of handling passengers movements of up to a half a million,” the firm added.

The $350 million project is being developed by Chinese firm Tianjin Union Development Group (UDG). It will be able to handle long-haul aircraft including the Boeing 777 and Airbus A340.

The project covers 4.5 hectares of land in Botum Sakor district near the Gulf of Thailand.

The airport is preparing documents to apply for airprone certification, one of the essential requirements before an airport can be given the green light, Sin Chansereyvutha, spokesman at the State Secretariats of Civil Aviation, said on Sunday.

“The whole construction process is close to completion, but  flights are not imminent  because there is still much work that remains to be done,” he said.

Dara Sakor Resort, is among the three priorities to serve the jabbed foreign tourists from November 30. The other two are Sihanoukville and Koh Rong Island, in Preah Sihanouk province, 240 km southwest of Phnom Penh.

In the meeting, Khon advised the firm to follow the prescribed health preventive measures against the spread of Covid-19 virus at the airport to ensure safety to tourists.

The Ministry of Tourism has given the opportunity for Dara Sakor vacation resort to properly prepare to follow the instructions of the government and the standard operating procedure.

“This is an important aspect and if implemented consistently, we will reopen the country soon,” Khon said.