Covid-19 patients in Jakarta dies within 11 days on average after having symptoms: Study 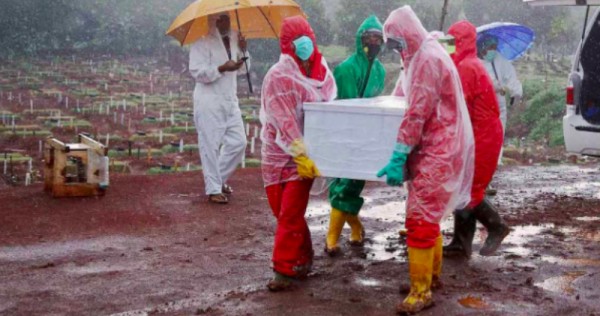 A study from Eijkman-Oxford Clinical Research Unit (EOCRU) shows that Covid-19 patients in Greater Jakarta died within an average of 11 days after they started having symptoms, which is faster compared to patients from other countries.

The study, which was conducted within the first five months of the pandemic, also revealed that the area also has the highest mortality rate for children under five years old. These conditions are caused by late detection and late hospitalisation.

Henry Surendra, one of the EOCRU researchers, said the study had involved 4,265 adults and children patients at 55 different Covid-19 hospitals.

The study also found that the infection pattern for patients in Jakarta reflects the condition of Covid-19 patients worldwide.

Most patients experience fever, coughing, breathing difficulties and discomfort, and over 40 per cent are diagnosed with pneumonia upon being admitted to hospitals. The death rate reached 12 per cent or 497 out of 4,265 cases.

A majority of deaths, or 78 per cent, occurred in patients aged 50 and above, while children aged zero to four made up 11 per cent of fatalities, and people aged 60 to 69 and 70 made up 22 per cent and 34 per cent, respectively.

The total number of Covid-19-related deaths in Jakarta is lower than reported fatalities in other high-income countries, such as the United States with a 21 per cent fatality rate and the United Kingdom with 26 per cent.

However, the aforementioned countries’ populations are mostly made up of senior citizens, which means that they were largely affected by comorbid as well as other chronic diseases.

“There’s a huge possibility that Jakarta’s fatalities rate is lower because of the average patient’s age being lower than the hospitals’ population,” Henry said.

On the contrary, a study on Covid-19 patients in China’s hospitals reported 3.1 per cent of total deaths. However, the study also learned that comorbid diseases rarely caused the deaths, while the country also has a similar average age of fatalities with Jakarta.

Through the study, Henry and his team also explained that the high fatality rate for children in Jakarta hospitals was caused by a lack of intensive care units for children, preexisting conditions like malnutrition and delayed treatment.

“We need further investigation to confirm the fatality rate as well as the cause of death among Jakarta children who contracted Covid-19,” Henry said.