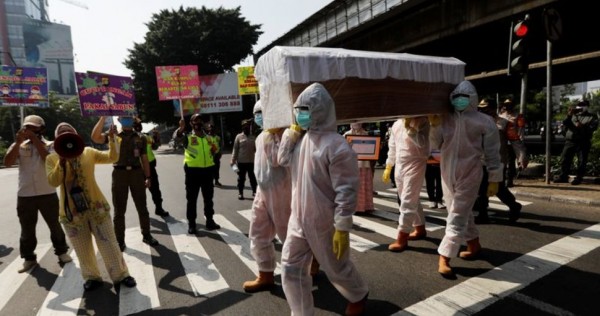 A resident of Ponorogo, East Java, died two days after apparently recovering from a coronavirus infection.

“Patient 329 from Jambon district died two days after his declared recovery from Covid-19,” Soedjarno, the acting regent of Ponorogo, said on Thursday as reported by kompas.com.

According to Soedjarno, the patient was declared recovered from the coronavirus on Monday but died on Wednesday while in self-isolation at home.

Ponorogo Health Agency head Rahayu Kusdarini said the patient had comorbidity, but she did not elaborate.

Previously, National Covid-19 task force chief Doni Monardo said that 92 per cent of Covid-19 patients in certain regions of the country had comorbidities, putting them at a high risk from the disease.

“Based on data from the past six months, up to 92 per cent of patients in some regions have comorbidity factors, with diabetes being the most common,” he said during a public discussion on Sept.16 as quoted by kompas.com.

He added that the province with the highest number of Covid-19 patients with diabetes was East Java.

“Covid-19 is very lethal to the high-risk group [the elderly and patients with comorbidity factors],” he said.

Therefore, Doni said, the government’s first priority was the protection of these vulnerable groups, while also looking to increase the testing capacity and optimise contact tracing.

“We test more than 30,000 specimens a day. However, this was still below the 38,000 people a day that the World Health Organisation recommends as the minimum, he said.

Separately, a patient in Medan, North Sumatra, has reportedly tested Covid-19 positive a month after recovering from the same disease.

Ori Kurniawan is the first person known to have been reinfected in North Sumatra and is now under isolation at a hospital in Medan.

Ori, 25, who works as an aide for North Sumatra Deputy Governor Musa Rajekshah, was declared to have recovered from Covid-19 by doctors at Adam Malik Hospital in Medan on April 6 after having been in isolation since March 25.

“[He] is the first Covid-19 patient [in North Sumatra] to have experienced reactivation and reinfection [of the virus], but where he got reinfected is still unclear,” Aris told The Jakarta Post.

The WHO has warned about possible reinfection with Covid-19.

“There is currently no evidence that people who have recovered from Covid-19 and have antibodies are protected from a second infection,” the United Nations agency said in an April 24 statement.

Eight months into the pandemic, much is left to be learned about Covid-19, including its long-term effects and how it affects survivors’ quality of life.

The WHO, in a Sept 9 update, said that, while people typically recovered from Covid-19 in two to six weeks, for some, symptoms might linger or recur for weeks or months following the initial recovery, even among those with mild cases.

The WHO said COVID-19 might increase the risk of long-term health problems, as it could affect not only the lungs, but also the heart, brain and the nervous system – resulting in, for example, anosmia, or the loss of the sense of smell, and cognitive impairment in terms of memory and concentration, musculoskeletal and mental health.