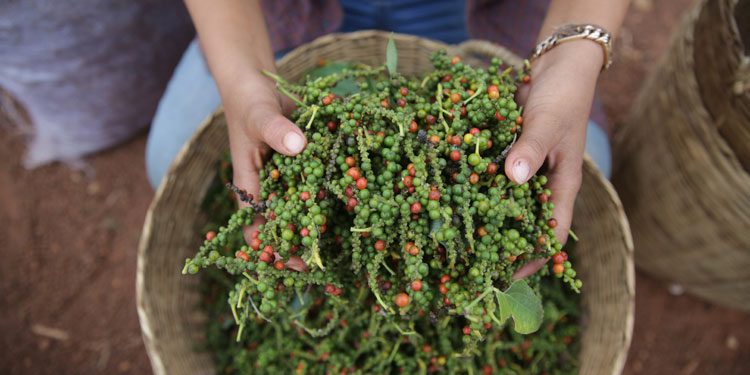 The Kampot pepper’s high quality and potential yield yearly is around 70 to 80 tonnes. Most is exported to foreign markets, including the EU, the US, Japan, South Korea, Hong Kong and Taiwan.

“ We have been exported more than 50 tonnes this year and hope it will be more for next year because the purchase order from foreign partners have been firmly confirmed”, said Lay.

Lay acknowledged COVID-19 has affected tourism, service, garment and other sectors but has not had much impact on agricultural because everybody needs food and ingredients for meals.

Insofar as COVID-19 has been affected by the loss of overseas tourists, some domestic sales have been hit.

“In addition to the 50 tonnes for export, we have some 20 to 30 tonnes for foreign tourists who visit Cambodia, but this is being passed on to other markets, including Vietnam”, Lay added.

Kampot pepper has been a certified Cambodian geographical indication (GI) product since 2016. This is a prestigious European Union designation affirming that its origin is crucial to its quality. It has three varieties – black, red and white – selling for about $15, $25 and $28 per kilogramme respectively and each with its own unique taste..

Besides, Kampot, Cambodian farmers can grow pepper in different provinces.  Pepper is Cambodia’s main agro product recognised on the international markets, although the export volume is still low.

According to a report by the Ministry of Agriculture, Forestry and Fisheries, in the first nine months of this year, Cambodia exported 4,121.95 tonnes of pepper, an increase of 123.76 percent on the same period last year.

Kampot is where a near-ideal combination of sea, soil and climate produces the very aromatic, nuanced – and expensive – spice.

Cambodians have been growing the Kamchay and Lampong varieties of pepper — the kind known now as Kampot pepper — for centuries, but it didn’t really become a significant cash crop until French colonialists started sending it back home in bulk in the early 1900s, when yearly production reached 8,000 tonnes.