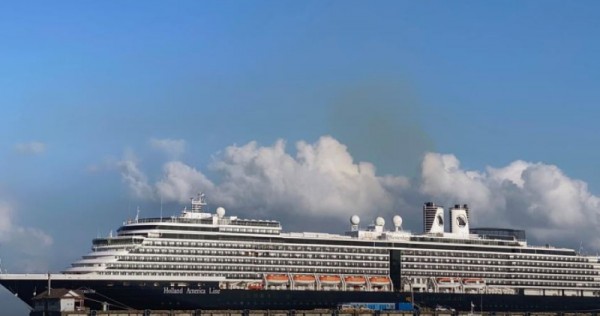 It is almost 9,700km (6,000 miles) from Sihanoukville, Cambodia, to Rotterdam, in the Netherlands, as the crow flies (assuming that crow makes it through Ukrainian airspace), and eight decades separate World War II and the Age of Covid. Nevertheless, one ship’s name connects all of the above (except the crow).

Three vessels have sailed with the name Westerdam painted on their hulls, all for the Holland America Line (known as the Nederlandsche-Amerikaansche Stoomvaart Maatschappij until 1989, when the Dutch company was bought by British-American cruise operator Carnival Corporation). They have proved to be a hardy trio.

The first was sunk not once, but three times, before it even made its maiden voyage, according to the Holland America Line archives.

“Her keel was laid in Rotterdam on Sept 1, 1939, but construction was suspended when Germany invaded Holland in 1940. On Aug 27, 1942, the half-completed ship was bombed by Allied forces at its berth and sunk.

After the war, the Westerdam was again refloated and construction was completed. From 1946 to 1965, the com­bined cargo/passenger vessel, with space for 143 first-class passengers, ran regular transatlantic services between Rotterdam and New York before being sold for scrap, which seems a cruel end for a ship that suffered such a traumatic birth.

The name was passed down to the MS Homeric, which was rechristened in 1986, when her operator – Italian company Home Lines – was merged with the Dutch line. Westerdam 2 sailed on more than 600 Caribbean, Panama Canal and Alaska cruises from 1988 to 2002, when she changed hands again and became the Costa Europa, which still plies European waters.

The MS Westerdam that cruisers know today – and which hit the headlines early in the pandemic, in February 2020, after setting sail from Hong Kong – was christened in April 2004 in Venice, becoming the third of Holland America’s four Vista-class ships. (The Vista sisters are all named for points on the compass in Dutch, the others being the MSs Zuiderdam, Oosterdam and Noordam).

She had seen her fair share of inci­dents – a collision with ice in Canadian waters, a boiler-room fire, and a sight­seeing plane crash in Alaska that killed the eight cruise passengers that had taken the flight – before February 12, 2020, when the South China Morning Post ran a story headlined, “Coronavirus: anxiety mounts on Westerdam cruise ship, set adrift over outbreak fears.”

Although not as notorious as the Diamond Princess , the Westerdam was one of many cruise liners that was caught up in the chaos as the world began to contend with Covid-19.

“When cruise passengers first boarded the MS Westerdam, they thought they were in for decadent dessert buffets and nightly appearances by a magician,” read the Post report. “Instead, the 2,257 passengers – mostly from the US, Canada and Britain – and [747] crew on board the Netherlands-flagged vessel have faced days of uncertainty adrift on the sea after being refused entry by five different ports.

“The ship […] set sail from Hong Kong on February 1, planning to dock in Yokohama two weeks later, but was denied entry to Japan, Taiwan, the Philippines and Guam before Thailand’s Health Minister Anutin Charnvirakul on Tuesday announced it would also be refused permission to dock in Laem Chabang port.”

It was something of a relief, then, when Cambodia came to the rescue, and allowed the liner to dock at Sihanoukville. Rather than pariahs, the passengers were treated almost as heroes, with Prime Minister Hun Sen, no less, greeting them with handshakes and bouquets of roses as they came ashore, having all tested negative.

Now, according to the Phnom Penh Post , “the government is making headway on plans to create the Techo Westerdam Park in Preah Sihanouk province, as a new attraction for national and international tourists looking for some time away from the beaches and islands.

“The site will commemorate Cambodia’s move to allow the inter­national cruise ship MS Westerdam […] to dock at Sihanoukville Autonomous Port on Feb 13, 2020.”

Plans are at an early stage – even the size and location of the park, let alone what will be in it, have yet to be decided – but the article quotes Preah Sihanouk Provincial Administration spokesman Kheang Phearum as saying he “believes the site will draw in visitors from all over, deriving its significance from the universal resonance of the MS Westerdam’s docking at the Preah Sihanouk port, where ‘Cambodia saved the lives of many people, of all races’.”

The spokesman continues: “We cleared the way for the tourists on board to return home safely […] The act was a loving humanitarian gesture, in the name of our shared humanity, on behalf of [Hun Sen].”

Describing Cambodia as a small country with a wide heart, the spokes­man hammers the point home to the Phnom Penh Post : “[Kheang Phearum] said the deed was not solely about ‘sharing the love’, but also about rescuing thousands of stranded people, which he said would be reflected in the park, as a reminder of the historical event that captivated the entire world.”

Did it, though? Perhaps for a day or two, but so much has happened since, it seems likely that when (if?) the Techo Westerdam Park does open its gates, Cambodia’s largesse will be a footnote in the annals of early 21st century history. Good on them, nonetheless.

As we’re talking about cruise liners … “A ship that can carry more than 9,000 people and enough beer to fill eight swimming pools has launched into the post-Covid world.”

That is how Britain’s The Times newspaper announced the recent arrival of Royal Caribbean’s Wonder of the Seas on the cruising scene. The Wonder has pinched the title of “world’s largest cruise ship” from sister vessel Symphony of the Seas and departed on her maiden voyage from Florida, in the United States.

It’s big, it’s brash and it’s one of the last things needed by a planet struggling to contend with climate breakdown, so we will leave it at that.

Bali to get more bike-friendly with new highway

Despite the recent easing of entry restrictions to Indonesia, Bali seems as far away as ever for most of us. Nevertheless, our cycling friends can dream of a more bicycle-friendly Island of the Gods when they return.

Coconuts Bali reports that the government has launched the 97km Gilimanuk-Mengwi Toll Road project, “the first turnpike in Indonesia with bicycle lanes”, according to Public Works and Public Housing Minister Basuki Hadimuljono. “Because [Bali] is a tourism region so we have to modify [the highway] with what the tourists need.”

Mengwi includes tourism hotspots Seminyak and Canggu while ferries from Gilimanuk Port connect Bali with Java. Construction of the new road is to begin in June, which is wheely good news.

US bans import of all Chinese sportswear giant Li-Ning’s products, citing use of North Korean labour