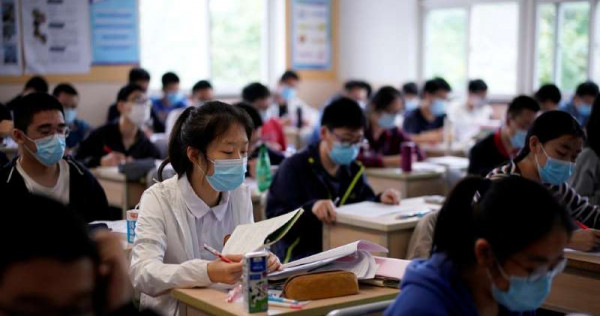 The World Health Organisation has called for a global effort to understand a rare inflammatory syndrome affecting children and teenagers that may be linked to Covid-19.

The global health body said on Friday there was “an urgent need” to gather more data from around the world to better understand the syndrome, which can cause multiple organ failures and resembles toxic shock syndrome and Kawasaki disease, a rare inflammation of the blood vessels that typically affects small children.

Children have not been seen as a high-risk group for Covid-19 – they accounted for around 2 per cent of confirmed cases in the US and China – but the appeal came as pupils began returning to school in countries such as Denmark, Australia and China, while other countries weighed up the risks of doing the same.

Children infected by Covid-19 have generally displayed milder symptoms than adults and are not thought to be major transmitters of the disease, according to the World Health Organisation, but there is no scientific consensus on how easily children can get infected.

“I call on all clinicians worldwide to work with your national authorities and the WHO to be on the alert and better understand this syndrome in children,” the body’s director general Tedros Adhanom Ghebreyesus told a briefing Friday.

Symptoms include fever, rash and signs of inflammation on the hands, mouth, or feet; hypotension or shock; gastrointestinal problems and abnormalities in the heart or blood vessels.

Early reports indicate that the syndrome may be linked to Covid-19, but this has not yet been confirmed.

A hospital in Italy’s Bergamo province – the part of the country worst hit by Covid-19 – reported a 30-fold increase in the monthly incidence of a Kawasaki-like disease compared with the past five years.

Of the 10 patients diagnosed between Feb 18 and April 20, eight also tested positive for Covid-19 antibodies.

Another cluster of children with the severe inflammatory syndrome was noted in April by clinicians in the United Kingdom, including one fatality.

All of the eight children infected later tested positive for Covid-19 antibodies, researchers wrote in a letter published in this month.

Possible cases have also been reported in France and Spain.

In New York, the US state that has been hardest hit by the virus, health officials are investigating 102 cases where children who may have been infected with the virus are showing symptoms of the inflammatory syndrome.

On Wednesday, the state’s governor Andrew Cuomo said that three children with the syndrome had died.

The following day, the US Centres for Disease Control issued an alert telling doctors across the country to look out for possible cases.

The WHO said the full spectrum of the disease was not yet clear, and it was not certain whether “the geographical distribution in Europe and North America reflects a true pattern, or if the condition has simply not been recognised elsewhere”.

The discovery of the syndrome is another “curveball” among many that the coronavirus that causes Covid-19 has thrown at doctors and patients, according to Sanjaya Senanayake, an infectious disease specialist and associate professor at the Australian National University.

“No one was expecting to see this in children, it’s an unexpected finding, but we are only about five months into the outbreak … it’s still relatively early, we’re still learning about [the virus],” he said, noting that other viruses could also play a role.

Senanayake also said the wider risk of infection was likely to determine whether the syndrome would become a factor to consider when it came to reopening schools.

“This seems to be a rare condition, if it’s related to Covid-19, then the reason we are seeing it in the US and Europe is because there’s so much Covid there,” he said.

“In countries with low Covid activity, it would still be reasonable to send kids to school, because we think the proportion of kids who get Covid is very low,” he said.