Cinema in Siem Reap reopen with the new normal 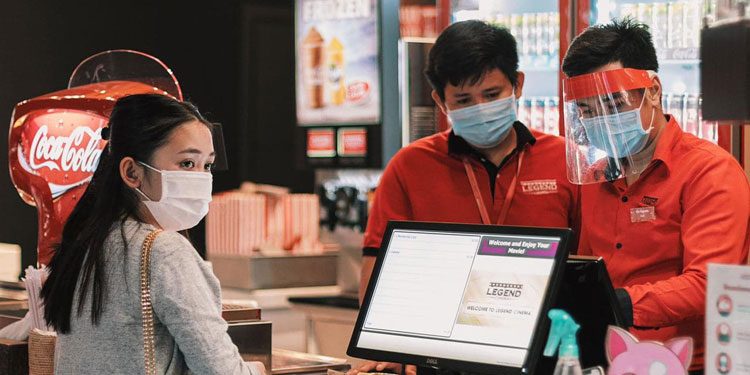 More than 11,000 people went to the cinema in Siem Reap in the first week of reopening by yesterday after the Ministry of Health (MOH) gave the green light to resume business after seven months of no revenue.

After they reopened last Thursday, movie buffs in Siem Reap were able to head back to their local movie theatre and catch up on the latest releases. The reopening, however, did come two months after cinemas in the capital were allowed to resume, leaving Siem Reap movie theatres behind on revenue.

Karen Castaneda, general manager of Major Cineplex, said: “We were not allowed to open at the same time as Phnom Penh because the government wanted to see the feedback and flow of the reopening in Phnom Penh. The MOH wanted to make sure that our other theatres were coping with the new normal.”

The new normal for cinemas in the Kingdom include social distancing markers throughout the cinema where people will queue, temperature checks at entrances, sanitisation stations, safety screens between ticket sellers and customers, safety masks being worn all around the cinema and movie screens only accommodating 50 percent capacity.

“Being closed has had a huge impact on our business. We still needed to pay rent and staff and we had continued contracts for stock even while there was no business,” she said.

“We are happy with the number of people that returned to the cinema this week, though. Even at 50 percent capacity, we can tell that people in Siem Reap have been missing the cinema.”

The length of time Siem reap movie theatres have been closed has also caused a stir with the locals.

Ali Calder, an expatriate who has been living in Siem Reap for the last five years, said: “We have been waiting for the cinemas to open for a long time now. With Siem Reap being so quiet at the moment it gives my family and me something to do and the kids love the cinema experience,” he said.

“We saw that Phnom Penh had opened two months ago so we thought that Siem Reap would not be far behind. We were completely wrong. I am, however, extremely happy that the movie theatre is finally open and safe.”

In comparison with other neighbouring countries such as Vietnam and Thailand, cinemas have been allowed to reopen as far back as May, having to only suffer around three months without funds coming in.

Ny Daranornn, marketing manager for Legend Cinema, said: “As result of being shut down for seven months we have lost the whole of our income from our Siem Reap branches. Being closed has also led to our usual audiences to fall out of the habit of going to the cinema. Hopefully, things will return to normal soon.”

With all movie theatres now back open across the Kingdom and a gradual return of movie fans, the cinema business in Cambodia should now be back on track. Upcoming movies over the next month include Honest Thief, Unhinged and Cosmoball.