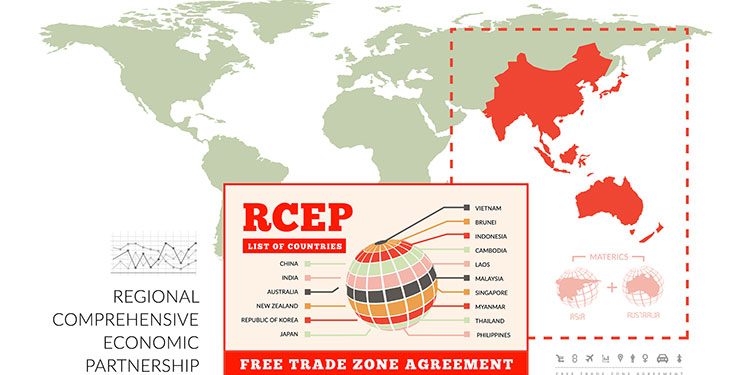 The RCEP includes 10 ASEAN members, China, Japan, the Republic of Korea (ROK), Australia and New Zealand. The 15 states’ total population, gross domestic product and trade all account for about 30 percent of the world total.

“After the RCEP agreement goes into effect, small and medium-sized enterprises will be offered more opportunities to take part in regional and global value chains,” said Su at the China International Import Expo (CIIE) held in Shanghai.

Su’s company sells medical equipment to 95 countries and regions worldwide, including RCEP members like Japan, Indonesia and the Philippines.

The RCEP is sure to give more impetus to the business growth of Chinese foreign trade companies, Su said. “Given a huge market and preferential tariffs, we will focus more on trade with the RCEP member countries.”

Many more Chinese companies will benefit from the trade pact. It will not only bring direct “dividends” such as tariff reduction and facilitate investment and trade but help restructure the industrial value chain in East Asia and speed up economic recovery in the post-COVID-19 era.

After the RCEP agreement takes full effect, more than 90 percent of merchandise trade in the region will be eventually subject to zero tariffs, including immediate zero tariffs and zero tariffs within 10 years, said Zou Dake, an official with Chengdu Customs.

Dongfang Turbine Co., Ltd. of Dongfang Electric Corporation will also be a beneficiary. It has been producing gas turbines in technical cooperation with Mitsubishi for nearly 20 years, importing some key components from Japan.

For each gas turbine, the key parts imported from Japan are estimated to be worth about 39 million yuan (about 6.1 million U.S. dollars). After the RCEP trade deal takes effect and the tariffs are reduced to zero, these key components will enjoy a tariff reduction of about 2.54 million yuan.

After China set carbon peak and neutrality targets, there has been a strong demand for Dongfang Turbine’s products, and the company will more than double its production to cash in on the opportunities, Liu said.

In order to enjoy zero tariffs, countries in the region will be more inclined to strengthen regional value chain cooperation, so as to locate more production facilities in the region, rather than elsewhere.

Compared with China’s entry into the World Trade Organization, the RCEP may have no lesser significance to China’s foreign trade and foreign trade enterprises, said Zhou Mao, deputy director of the Institute of International Trade at Southwestern University of Finance and Economics.

“In the future, Japan and ROK’s research and development advantage, China’s industrial system advantage and ASEAN’s human resources advantage could work together to optimize the division of labor and boost the economic recovery and prosperity of East Asia in the post-pandemic period,” Zhou said.

Nie Xinyu, an official with the China Council for the Promotion of International Trade Guangxi Committee, said Guangxi, at the forefront of China-ASEAN exchanges and cooperation, is seeking to build itself into an important part of some industrial, supply and value chains in the RCEP region.

In response to RCEP’s new trade and economic rules, Guangxi has recently introduced a raft of new measures, seeking to boost merchandise trade, accelerate the construction of cross-border industrial and supply chains with the ASEAN, and deepen investment and service trade cooperation.

Thanks to China-ASEAN economic and trade exchanges in recent years, the TWT Supply Chain Management Co., Ltd. in Guangxi has grown into a one-stop supply chain service provider, covering over 50 Chinese cities and several ASEAN countries. The company will embrace more business opportunities as the RCEP deal goes into effect.

Wang Zhengbo, president of TWT Supply Chain, said the company will continue to deeply cultivate the ASEAN market and tap the markets of Japan, ROK, Australia and New Zealand by expanding imports and exports to cover more categories.

The RCEP negotiations started in 2012, and it took eight years to formally sign the agreement, but it took less than one year for the RCEP agreement to reach the threshold of entry into force.

“This has fully demonstrated the urgency of economic integration in East Asia and the determination of countries in the region to maintain stable and secure supply chains in the post-pandemic era,” said Zhou of Southwestern University of Finance and Economics. The trend of defending multilateralism and free trade in a large number of countries is irreversible, he added.