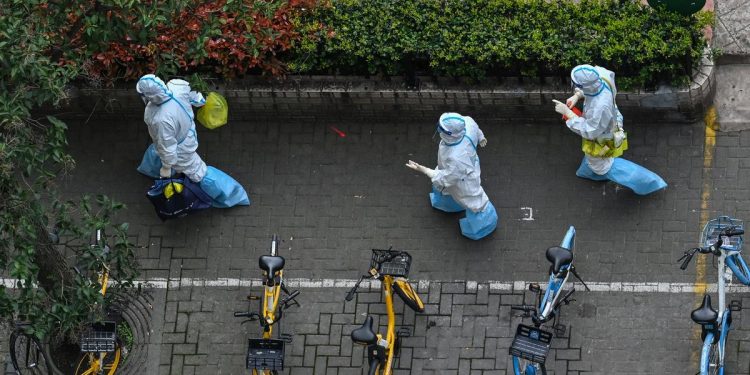 While most American cities are opening up and lifting COVID-19 restrictions, one of the biggest cities in the world has been shut back down. Shanghai, China‘s most populous city with some 25 million inhabitants, was largely at a standstill on Friday as China battles its worst wave of coronavirus infections since the start of the pandemic.

CBS News’ Lucy Craft reports the hardships of the lockdown have raised questions about the Chinese government’s adherence to its hardline “zero-COVID” strategy.

Shanghai’s lockdown was supposed to last just a handful of days for residents, depending on where they lived, with a two-phase roll-out. The first half of the city — the Pudong district — went under restrictions on Monday, and it was meant to last there for five days before being lifted and transferred to the Puxi district for four days.

The idea was to minimize disruption in the global hub for finance and trade, which is China’s largest and wealthiest city. But that plan has been abandoned.

As of Friday, most of Shanghai was set to remain shut down, including Puxi and a significant part of Pudong, where the restrictions were meant to be lifting. The timeframe was also changed, casting doubt about when life would be back to normal.

Shanghai’s modern streets have been transformed into a post-apocalyptic landscape, with police checkpoints manned by workers in hazmat suits and residents barricaded into their homes, allowed out only to get mandatory COVID tests. Even the city’s infants are being screened.

Residents can’t even go out to walk their dogs, though in some compounds security guards are picking up and walking pets for residents. Most of the “canines” seen on Shanghai’s streets are government robots, broadcasting anti-infection tips.

After days of panic buying and food shortages, frustration in the city has soared.

American Shaun Rein, who lives in the Pudong section of Shanghai, has been locked down for 11 days, since his neighbors were identified as “close contacts of close contacts.”

CBS News asked him if sentiments toward the official “zero-COVID” policy were hardening among Shanghai residents.

“I think there are a lot of people in Shanghai who are saying, you know, right now the medicine is worse than the disease,” he told CBS News. “We have people who are dying because they can’t get access to medical care. How many people have actually died from this recent surge of COVID? The government has told us zero.”

Wrenching stories of residents dying because they’re unable to receive care during the lockdown have come to light. A nurse died of an acute asthma attack, unable to seek treatment at the hospital where she worked because it was undergoing disinfection.

A 77-year-old man was taken off dialysis when he tested positive for COVID and died before he could be transferred to another facility, according to a story in China’s Global Times tabloid, which was later censored.

Rein, a businessman, said residents were given just a few hours’ notice of the impending lockdown, triggering panic buying at supermarkets. He and his family have had to manage largely on canned food, because online suppliers have been inundated.

On Thursday, Rein posted a picture of the emergency food supply delivered by city officials — some carrots, cucumbers and cabbage.

“Shanghai is supposed to be the best-run municipality in China,” he fumed. “People throughout the entire country are seeing the chaos here, so they’re getting nervous. So, they’re hoarding food.”

Despite official pronouncements about an endpoint to the lockdown, Rein said he feared the shutdown could drag on far longer.

“I’m expecting to be here at least two more weeks, but I wouldn’t be surprised if I’m still here in June,” he told Craft.

Despite the strain on residents, China has vowed to maintain its zero-COVID policy.

This article was first published in CBS News. All contents and images are copyright to their respective owners and sources.