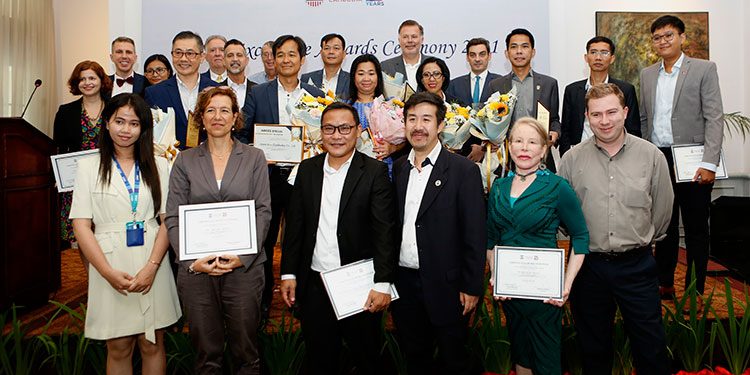 They were organised as a standalone event this year, rather than part of the American Chamber of Commerce’s annual general meeting, because AmCham said it wanted to draw more attention to companies that have contributed to society during the Coronavirus pandemic.

“We must recognise the importance of giving back, not only to do business and make profits,” said AmCham President Anthony Galliano.

He said the chamber had been very active in CSR this year, donating computers, medical supplies and food to the needy and looking after its own members by helping them get vaccinated.

“The world is facing incredible challenges, especially in the areas of climate change, pollution, gender equality and poverty and education,” Galliano said. “As foreigners we should view ourselves as ‘citizens in spirit’ and support the country we do busines in.”

The annual CSR contest attracted twice as many applicants as last year. Entrants had to undergo the exacting scrutiny of judges Lauren Higgins, Economic Associate at the US Embassy, Sabine Joukes, Chief of Party for the USAID-funded Women Entrepreneurs Act project, and former State Department diplomat and ambassador William Munroe.

The judges selected 18 companies, with 14 of them recognised in a ceremony at Phnom Penh’s Raffles Hotel Le Royal. All were presented with special recognition certificates but three standouts took the awards for the categories impact on Covid-19, impact on the environment and social impact.

In the Covid category Cellcard beat four other nominees. It set up a vaccination centre in a hotel which delivered shots to 10,000 people. The telco established an information platform using social media to educate people about the Coronavirus. In April’s lockdown Cellcard installed 169 4G LTE sites in red and yellow zones to increase the capacity and speed of wireless signals and also delivered food to locked-down communities. Cellcard teamed up with the Ministry of Education to provide free data for e-learning to help children forced to study from home. It provided free SIM cards and mobile data to 380 educators. Finally it set up an e-vault to store digital vaccination records.

Wing won the social impact award, the category that saw the most entries. It funded free treatment at a children’s hospital, encouraged its staff to donate money and organised a 5,000 riel donation campaign through its nationwide chain of agents, who were also asked to contribute. Those efforts, combined with a sponsored run and walk, raised $100,000 for the Kantha Bopha hospital.

AmCham says CSR is so important to its members that it is forming a dedicated committee to tackle the issues of climate change, gender equality, environmental protection, poverty reduction, and education.