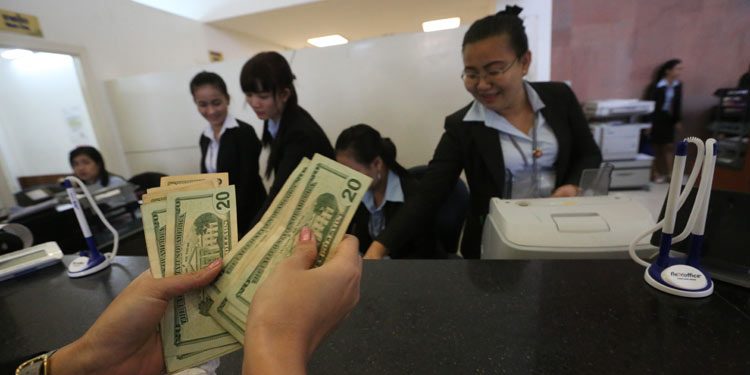 As non-performing loans (NPLs) and portfolio at risk (PAR) ratios challenge the economic situation, experts say that they are “cautiously optimistic” regarding loan repayments.

“The prolonged effects of curfews and uncertainty continues to adversely impact the SME [small and medium-sized enterprise] sector, which is a vital segment of the economy,” an executive at a leading microfinance institution told Khmer Times under the condition of anonymity.

“The impact is more acute and profound depending on the location and related Covid impact,” he added.

Cambodian banks have restructured more than $4.2 billion of loans this year and outstanding loans rose by 19 percent year-on-year to $33.9 billion, according to a National Bank of Cambodia (NBC) report released in June.

Debt past due over 30 days and personal loans have increased substantially during the pandemic, according to Credit Bureau of Cambodia figures.

While, industry insiders have previously said that the amount of overdue loans is not at a worrisome level, there are dueling fears in the industry – one that NPLs will sink the Kingdom’s economic recovery, while other voices say that the situation would be worse had the NBC not intervened.

“The impact would be much greater if not for the grace periods and other support measures put in place by the financial services sector to alleviate the pressure on SMEs. Whilst there are increases in NPLs and PAR ratios of financial organisations, they do not appear to be a huge concern as the strength of the sector and confidence in the authorities’ management of the situation and predicted recovery remains high,” said the MFI executive.

A former executive at a bank said that if even 20 percent of restructured loans defaulted it would result in a “national disaster”.

“I think the situation will be analysed and studied for years to come. I think it is undeniable that delaying loan repayments was the right call at the right time, but it would be foolhardy to expect that the country will look the same after more than a year and a half of Covid,” he said.

According to the executive, those banks with more balanced lending portfolios will likely emerge from the pandemic stronger than they entered.

“While the curfew impacts greatly entertainment, restaurant and cafe businesses operating at night, the share of such businesses in the overall portfolio of ABA is low,” he added.

Anthony Galliano, president of the American Chamber of Commerce, projects Cambodia to experience a V-shaped recovery once the pandemic lifts, preserving the hospitality sector and consequently improving employment figures, wages and SMEs.

When asked whether the curfew will result in increased NPLs in rural Cambodia, he said: “While there is deep concern that continued restructuring is just kicking the can down the road and will eventually lead to a spike in NPLs, I believe the pandemic economy is different than traditional economic recessions or depressions, which are systemic, prolonged and severely damaging.”

In March of last year, the NBC issued the ‘The Circular on Loan Restructuring during Covid-19”, widely seen as the opening gambit in the stabilisation of the banking system.

“While curfews and lockdowns suppress business activity, the prolonged ramifications are more on consumer confidence, with reluctance to spend persisting after restrictions are lifted.  While these measures are painful and challenging for business, the Royal Government must be applauded for doing what is right in the best interests of the citizenry and serving the needs of the people first and foremost,” added Galliano who is also group chief executive officer of Cambodian Investment Management Holding.

“The priority has been preservation of lives over economics, with the best possible balance of limited restrictions, which has substantially kept business open to the greatest extent possible,” he stressed.

Cambodia’s economy forecasted to grow by 2.5 percent this year