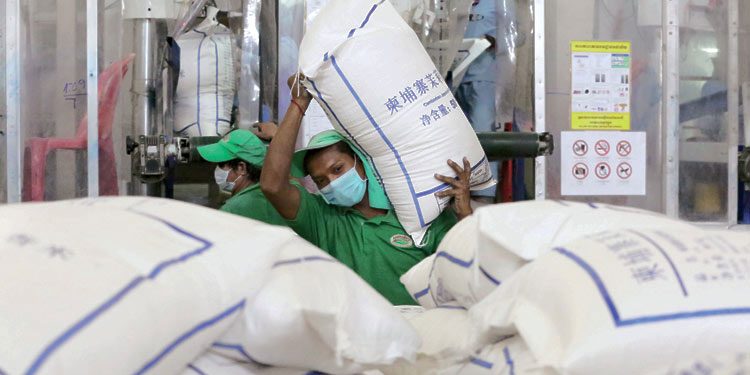 Prime Minister Hun Sen said Cambodia is aggressively promoting its agricultural sector, particularly the exports of rice. He added that Cambodia will not experience food insecurity like in the past.

The statement was made at the official launch of the “Cash Transfer Program for Poor and Vulnerable Households during Covid-19″ on 24 June 2020, at the Peace Palace, Phnom Penh.

“We are boosting the agricultural sector this year. With Covid-19, we expected less export, but the figure grows significantly. We used to export about 500,000 tons before, but this year might be 800,000 tons or more,” said Prime Minister Hun Sen.

“Our strength is producing a surplus of six million tons. Some said Cambodia is vulnerable to food insecurity, but I want to inform that we have millions hectares of land for cultivation,” he added.

Cambodia exports three types of rice, including fragrant rice, white rice, and steamed rice to China, the EU, and ASsean.

According to the Cambodian Rice Federation (CRF), the Kingdom earned more than $240 million from the first five months in rice exports in 2020. Within the first five months of 2020, Cambodia exported 356,000 tons of rice, an increase of over 42 percent compared to the same period of 2019, which was only 250,000 tons.

2020 export figure is considered as the most significant growth in Cambodia, the highest volume exported in four months over the last 10 years history, said CRF.

Cambodia has developed from a country mired in poverty and serious food insecurity to a rice-exporting country. The Kingdom becomes one of the highest and fastest growing economies in the world, and a great performer in terms of poverty reduction.

According to the World Bank, Cambodia has undergone a significant transition, reaching lower middle-income status in 2015 and aspiring to attain upper middle-income status by 2030. Cambodia’s economy has sustained an average growth rate of 8 percent between 1998 and 2018. Cambodians living under the national poverty line fell from 47.8 percent in 2007 to 13.5 percent in 2014. FRESH NEWS