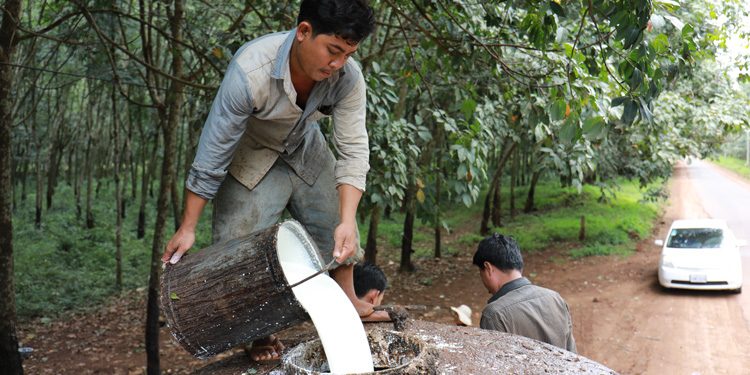 0
SHARES
2
VIEWS
Share on FacebookShare on Twitter
A senior official from the General Directorate of Rubber at the Ministry of Agriculture has said Cambodia’s rubber exports are expected to reach 340,000 tonnes by end of the year.

General Directorate of Rubber Director-General Pol Sopha, noted this was an increase over the 280,000 tonnes exported in 2019 and that the growth rate of rubber exports is expected to increase through 2024.  Sopha said it is anticipating that  yearly increases will be in the range of 30,000 and 40,000 tonnes because some rubber trees will no longer be capable of generating latex during that period and will need to be cut down for replanting to take place.

Sopha added that it takes six years for newly planted rubber trees to mature and provide a latex harvest.

The director-general went on to say that Cambodia sent around 60 percent of its rubber production to Vietnam, with most of the remainder exported to China, Malaysia, Singapore and Europe. “Most of our rubber exports are processed rubber, but there are also exports of latex across the border corridor where some farmers sell their latex production.”

Association for Rubber Development of Cambodia (ARDC) President Men Sopheak said the price of rubber in Cambodia is seen now as promising.  He added  that local companies can sell it for up to $1,700 per tonne, with the majority  of producers sending product on to Vietnam.

When asked whether investors were looking at opportunities to produce finished rubber products in Cambodia, Sopheak said many had shown interest in setting up factories, but rubber production in Cambodia is small compared with that of Vietnam and Thailand, where there are between 2 to 3 million hectares of rubber plantations. He said Cambodia’s half million hectares of plantations make it difficult to justify the investment in processing factories.

“Recently, some rubber plantations were completely logged out and replanted to other purposes because of falling rubber prices and there is a lack of available labour in the industry. These factors also present challenges to investors,” Sopheak added.

The Vietnam News reported last week that Vietnam produces around 1.1 million tonnes of natural rubber each year. Sixty percent of the raw material needed for that production comes from small farming households, with imports of another half a million tonnes from Cambodia and Laos making up the remainder.

This article was first published in Khmer Times. All contents and images are copyright to their respective owners and sources.
Tags: CambodiaCambodia’s rubberCambodias rubber export
Previous Post