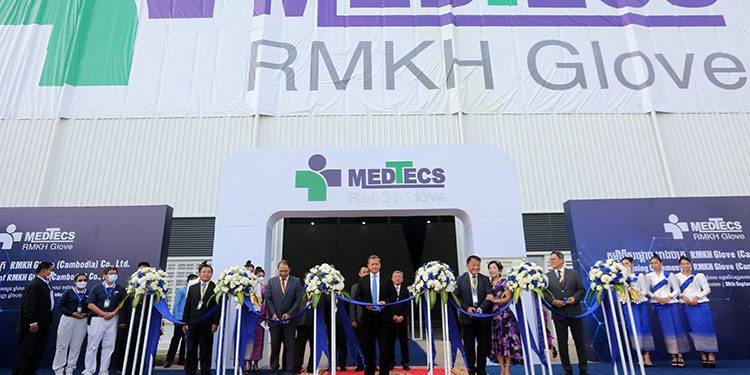 The Kingdom’s first glove manufacturing factory, RMKH Glove (Cambodia), announced the launch of its production operations at the Manhattan Special Economic Zone (MSEZ) in Bavet on Friday with a glittering ceremony attended among others by a galaxy of top government officials and leaders from the private sector.

The high-quality medical-grade glove manufacturing facility can accommodate up to 10 production lines with a monthly production of 250 million pieces. The main raw material used in these gloves, NBR latex, has good abrasion and puncture resistance and does not contain allergens found in natural latex.

While commending the efforts of the Medtecs Group to invest in the factory when the country was hit hard by Covid-19, Hun Manet said it significantly contributed to the Kingdom’s efforts to fight the pandemic. “It shows the strong commitment of the company for Cambodia’s growth,” he said.

According to Manet, Bavet has turned out to be a production hub and a model of prosperity for Cambodia with several special economic zones and 178 factories providing employment to about 90,000 people. “The perception that Bavet is only a city of casinos is wrong,” he said.

“Over the last two decades, Cambodia has become one of the most attractive foreign direct investment (FDI) destinations in the world with about seven percent of GDP growth rate. This growth has enabled the country to move from a low-income country to a lower middle-income country by 2015, helping to reduce poverty from about 53 percent in 2004 to 17.8 percent in 2020. The huge success is the result of the right decisions and the ‘Win-Win’ policy of the government under the wise, realistic and long-view leadership of Prime Minister Hun Sen,” Manet added.

The government, according to him, provided favourable conditions for the growth of exports and attracted FDIs under the new Investment Law, especially in special economic zones through the many incentives for investors such as tax exemption. The government also has strengthened Cambodia’s economic resilience by increasing human resource capabilities through vocational training.

Clement Yang, Founder and Chairman of Medtecs Group and Manhattan Special Economic Zone, while making his remarks at the launch ceremony called the project a milestone for the company as by far it is the Group’s biggest investment in Cambodia.

“We have pledged and spent about $30 million, and we are only looking at the first-stage investment. On the other hand, this facility is a game changer for Cambodia’s manufacturing sector. It is a shining testament to the country’s potential to do more than just simple garment manufacturing. It shows that Cambodia has the ability for more advanced chemical manufacturing where automation, chemical engineering and process optimization are the key,” Clement said.

“Going forward, there is no need to depend on foreign exports of gloves. We do plan to add more production lines if we see a clear and strong market demand for our products,” Clement said. The Kingdom imported 200 million pieces of gloves last year, mainly for medical use.

In 1998, Medtecs became one of the first big foreign investors to invest in the country with a factory in Kampongchan that took up about 20 hectares of land.

Two years later, world-famous supplier of personal protective equipment (PPE), DuPont USA, became its client, and the company started making coveralls and PPE items with the DuPont logo and a ‘Made in Cambodia’ tag.

The MSEZ today has 36,500 workers and its exported goods constitute five percent of Cambodia’s total export value. Plans are also underway to transform the SEZ into a sustainable, carbon-neutral smart city where green manufacturing is the norm, with amenities and infrastructure such as schools, hospitals, transportation hubs and sports and entertainment facilities.

National Bank of Cambodia to take action on banks, MFIs in Cambodia not using KHQR