Cambodia’s border trade with Thailand down 4.5 percent in four months 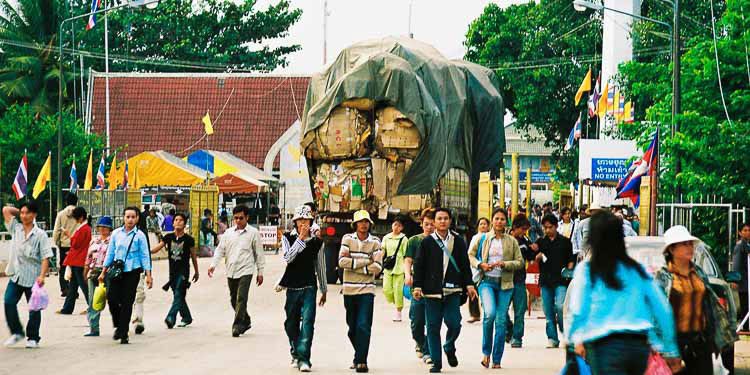 Thailand’s cross-border trade rose by 26.7 percent in the first four months of this year, raising its government’s confidence that such trade will grow by 3-6 percent in 2021 after declining 1.7 percent last year.

However, cross border trade with Cambodia dropped by 4.5 percent during the same period, due largely to border closures.

For border trade, Malaysia remained the biggest partner of Thailand by value. Two-way trade between Thailand and Malaysia hit 107 billion baht in the period (up 52.9 percent), followed by Laos at 71.2 billion baht (up 13.5 percent) and Myanmar at 60.2 billion baht (down 0.002 percent).

Meanwhile, transit trade of the Southeast Asian nation increased to all markets in the period, with trade to southern China posting a 54.3 percent rise to 102 billion baht, Singapore 34.6 percent to 36.2 billion baht, Vietnam 22.5 percent to 22.4 billion baht.

The strong growth in cross-border trade is attributed to close cooperation between the ministry, related state agencies and the private sector through the Joint Public and Private Sector Consultative Committee on Commerce to eliminate export obstacles and speed up reopening of border checkpoints, Jurin said. VNA

Banks to play bigger role in insurance sector in Cambodia