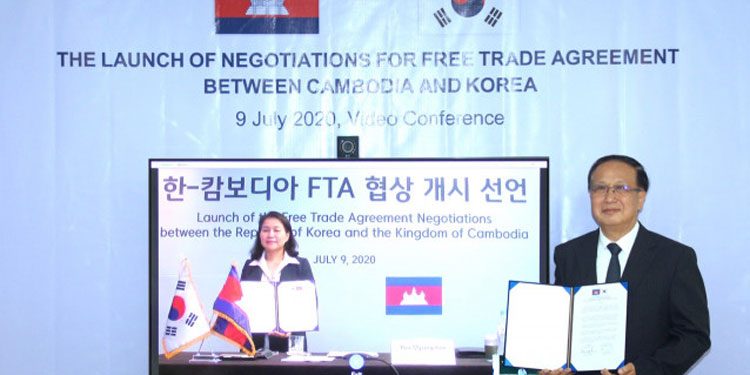 A senior official of the Ministry of Commerce (MoC) said negotiations towards a free trade agreement (FTA) between Cambodia and South Korea saw agreement on 90 percent of the issues addressed as the fourth round of talks concluded last month.

Cambodian Ambassador to South Korea Long Dimanche said that while he is not a member of the negotiations working group and cannot speak first-hand on the status of the talks, he could say that both governments want to see an agreement signed as soon as possible.

Dimanche added that economic concerns have been set as a core and key priority for foreign policy as executed by the Kingdom’s Ministry of Foreign Affairs and International Cooperation. Therefore, the Kingdom’s diplomats are responsible for both their politically driven diplomatic duties and maintaining a sharp focus on economic diplomacy.

“The embassy of Cambodia in South Korea plays a crucial role as a sales agent for Cambodia in providing information about Cambodia to Korean investors and businesspeople. It is counted on to ensure that [Korean investors] understand the potential of Cambodian-produced goods, the Kingdom’s investment environment, and the laws and regulations of Cambodia,” he added.

As of November 2020, bilateral trade between Cambodia and South Korea had reached more than $700 million. South Korean exports to Cambodia accounted for about 70 percent of that total with South Korean imports from Cambodia comprising the remainder, according to Dimanche. The ambassador pointed out that pre-COVID-19, the value of trade between the two countries reached nearly $1 billion in 2019.

The ambassador went on to note that while trade between the two nations is not  balanced, what is more important is that the value of bilateral trade continues to grow year-on-year

He also remarked on the importance of COVID-19 not having shut down flights between Cambodia and South Korea, which allowed a gateway to continue to be open for local and foreign travellers, businesspeople and investors to enter Cambodia via South Korea.

“While the issuing of tourism visas has been suspended, business visas have continued to be issued monthly to South Korean business people and investors, at a monthly rate of between 400 and 500 a month,” said Dimanche.

Data from the Korea International Trade Association (KITA) indicated that between January and October 2020, two-way trade between Cambodia and South Korea was valued at $724 million, a decrease of 16 percent to the same period a year ago.