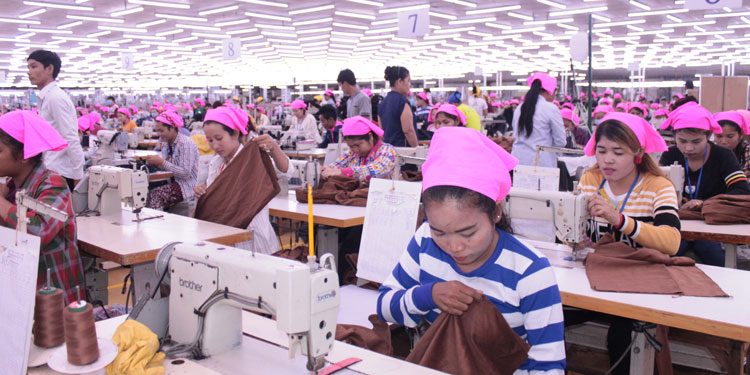 Cambodia is gearing up for bilateral trade deals with partner countries after the partial removal of the EU’s trade preferential scheme, known as Everything but Arms (EBA), on Aug 12.

Experts said the Kingdom should have rammed up efforts to negotiate free-trade agreements (FTAs) with other markets long ago to prevent the sudden loss of market access which caused huge redundancies.

China is the first country to have officially signed an FTA with Cambodia – on Monday, during a two-day official visit by Chinese Foreign Minister Wang Yi.

Commerce Minister Pann Sorasak said that it was the first bilateral FTA for Cambodia. China is a long-standing friend and, in addition, Cambodia and China have a comprehensive strategic partnership.

“The signing of this agreement signifies an even stronger tie between the two countries and marks another key historical milestone for Cambodia-China relations,” he said.

The minister said the agreement would result in a more robust economic partnership through a high degree of market-access liberalisation for goods, services and investment.

“As for the next steps, I am fully convinced that both sides will be able to complete all internal procedures necessary so that both countries can exchange the instrument of ratification for the implementation of this agreement by early 2021,” he said.

An FTA with the world’s second-largest economy will open the door for more Cambodian goods and agricultural products, such as bananas, cassava flour and rubber to be exported to China.

Cambodia is now in talks on an FTA with South Korea, the third round of negotiations of which have just concluded. Through FTAs, Cambodia expects to increase bilateral trade between partner countries rather than trade exemptions that could be withdrawn at short notice. Prime Minister Hun Sen said the EBA deal will be lost in total one day but free trade agreements will last forever.

Van David, a senior associate at public-private partnership PLATFORM IMPACT, said the China market is more price-oriented than the EU, which tends to focus more on quality and ethical aspects.

“Therefore, how we can try to compensate for the lower volume of goods exported to the EU through EBA revocation and expand our base to China depends pretty much on our competitiveness,” he said, citing effective infrastructure, production and transportation costs as well as meeting Chinese sanitary and  phyto-sanitary norms.

However, he said FTAs between countries could sometimes be advantageous to one country and less so to another depending on the competitiveness of either one of the signatories.

“Cambodia now has a channel to export its goods and services but would need to work harder in increasing competitiveness, which is always the key factor for exports,” he said.

The EU, which is the Kingdom’s biggest trade partner, in the meantime has signed an FTA with Vietnam (EU-VN FTA). The pact would see Cambodia exports reduce their competitiveness to the trade bloc.

David said the EU-VN FTA was in the making and part of Vietnam’s economic strategy ever since the last decade and the EBA deal was more a privilege granted to least-developed countries (LDCs) and could at anytime be withdrawn by the EU depending on whatever criteria or excuse it deemed fit.

“The EBA deal has been revoked for some LDCs in the past but in the case of Cambodia the decision was more political than economic,” he said.

According to the Ministry of Commerce, the government has planned for more two-way agreements with some countries and blocs such as the UK, the Eurasian Economic Union (Russia, Armenia, Belarus, Kazakhstan and Kyrgyzstan), the US, Japan, Mongolia and India. The ministry has already established groups to be in charge of the trade negotiations with those partners.

Cambodia’s annual $7 billion garment and textile sectorwas mostly exported to the EU and the US under trade preferential agreements, while exports to China are largely agricultural products.

The bilateral trade volume between China and Cambodia stood at $9.42 billion last year. The two countries have set out to reach $10 billion by 2023.