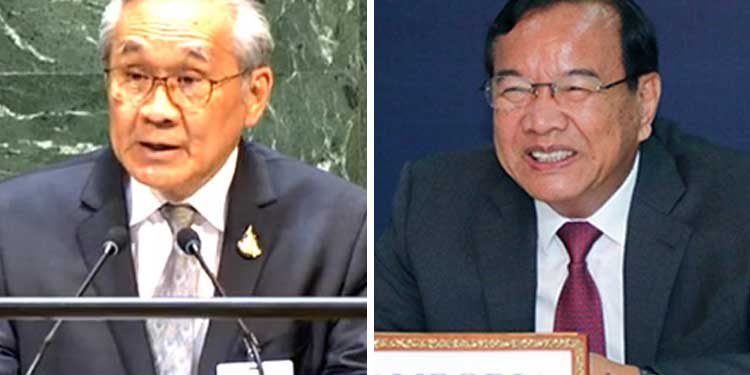 Foreign Affairs Minister Prak Sokhonn has asked Thailand to help push for more Thai investments in Cambodia saying such investments in the Kingdom have nearly tripled from January to August this year compared to the same period last year.

“Cambodia encourages more Thai investors to venture into Cambodia,” Sokhonn said in a statement released on Saturday after a meeting with Thai Foreign Affairs Minister Don Pramudwinai on Friday.

“Both sides were pleased to note significant progress in other main sectors such security, education, tourism, energy, and connectivity,” the statement said.

This year marked the 70th anniversary of the diplomatic relations between Cambodia and Thailand.

The statement said both sides were pleased with strong two-way trade despite the COVID-19 pandemic, adding that Cambodia has proposed that Thailand should facilitate cross-border trade transportation, increase Cambodian agricultural product imports, and expedite the signing of the MoU on goods in transit.

The two countries highlighted the importance of the effective bilateral agreements between them.

They looked forward to the convening of the 4th Joint Cabinet Retreat (JCR) and the 11th Joint Commission for Bilateral Cooperation (JCBC) as early as possible when the COVID-19 pandemic situation subsides, said the statement.

“Both sides also strongly committed to supporting one another in multilateral frameworks such as Asean and Asem,” the statement said.

The two ministers expressed strong commitment to working closely together to enhance long-lasting bonds of friendship, good neighbourliness, multifaceted, cooperation, and partnership for peace, and prosperity of the two Kingdoms, it added.

Sokhonn also asked Thailand to allow Cambodian migrant workers who hold border passes and workers under MoU to return to work and reduce the cost of the 14-day quarantine.

The two sides hope that Thailand’s successfully produces its vaccine to be available soon, according to the statement.

Royal Academy of Cambodia’s International Relations Institute director Kin Phea said yesterday that relations between the two countries bring mutual benefits and both need one another with respect to politics, economics, and labour.

“If Thailand does not have opportunities for providing Cambodian workers with jobs, it will be a big problem for Cambodia,” Phea added.

Japan looking to reopen its borders to foreign tourists in 2021, here’s what to expect if you go