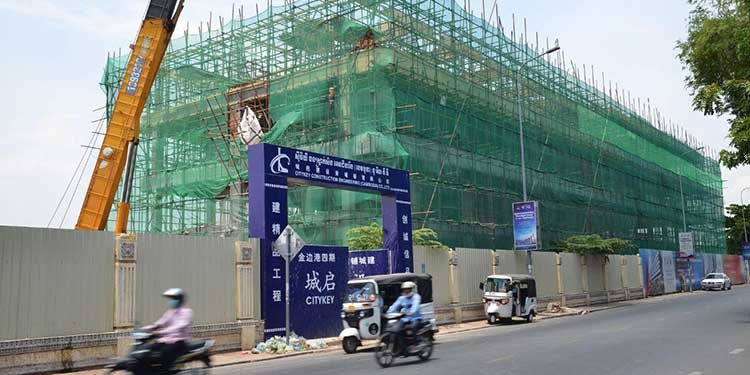 The construction part of Yuetai Group Co Ltd’s City Gate development project along the riverfront has completed 80 percent of its shop house block while work on the other three blocks will start soon, according to the company’s sale representative staff.

The project, which is also known as Phnom Penh Harbour Bay, has been building its three-storey shop house blocks next to the City Night Market. It is expected to be finished by next month.

The company’s sale representative who asked not to be named because she is not authorised to talk to the media said the third phase of the project is expected to start soon after the Japanese JICA-supported channel restoration project is finished by June.

“For the fourth phase of the project, we have completed about 80 percent of the building construction structure and will be finished at the end of this month or early June,” she said.

If nothing changes, the project will be divided into four phases, with the second phase comprising two 46-storey condominium blocks and two commercial buildings.

Chrek Soknim, president of Cambodian Valuers and Estate Agents Association (CVEA) said that overall the activity of big construction projects in Phnom Penh is proceeding as normal even though the COVID-19 pandemic.

“The COVID-19 is just a short term crisis and it will not stop such the big investment project that cost hundred millions of dollar,” he said.

According to Soknim, after the Cambodia has reported zero cases of COVID-19, the property market seems to have become active again and people have started shopping. “We will see the market sentiment return to normal shortly in the future so the sector still has more potential,” he said.

The whole project has a total area of 92,538 square metres (sq m) and was leased by Phnom Penh Autonomous Port in 2018 for $16.5 million on a 50-year agreement. It extends along the Tonle Sap River from the Chroy Changvar bridges to the Night Market.

The mixed-use concession is under development by Chean Chhoeng Thai Group Co Ltd, which is a subsidiary of Guangzhou-based real estate company Yuetai Group.

The structure is set to include office buildings, a commercial complex, an arts centre, a cultural square, resorts, condominiums, a five-star hotel, an exhibition centre and a public park.

Since 2009, Yuetai Group has developed three major projects in Phnom Penh, including East One, East View and Yuetai The Garden.