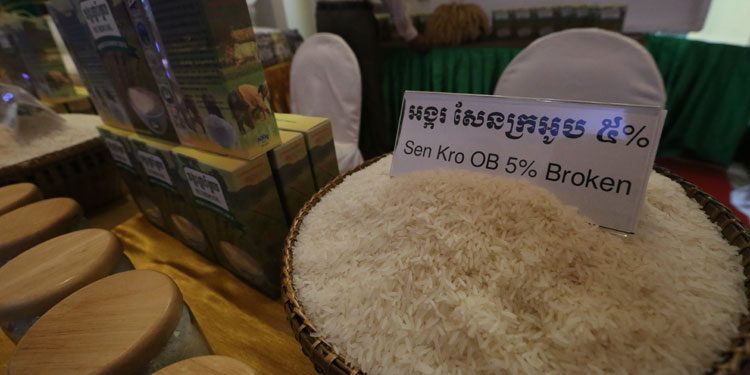 A senior executive of the state-owned Agriculture Rural Development Bank (ARDB) said there have been no cases of rice mills mixing different varieties  of the crop in the Kingdom, but called for relevant authorities to pay heightened attention to ensure this continues to be the case.

His dismissal of the worries came after some buyers had asked for quotations for a mixture of rice varieties from local millers of two rice strains, the fragrant Cambodian Sen Kro Ob and the OM5451, which originates from Vietnam.

ARDB Director-General Kao Thach confirmed some buyers had requested a quotation on a mixture of the varietals but were unable to find local rice millers who would agree to provide one.

“We have not seen any verified cases of such requests being offered yet in the country so far,” Thach added. However, he did confirm that Cambodian farmers also grow the OM5451 varieties, in particular, farmers in Prey Veng province,  which is close to the border with Vietnam. The demand for OM5451 from Vietnam is high and this variety of paddy is similar to those that grow Cambodia’s Sen Kro Ob, he said.

Sen Kro Ob has a smooth aroma and soft texture and is nearly identical to Phka Malis rice. It is the perfect grain for those who like a soft, but chewy, scented rice, according to Mekong Oryza, one of the Cambodia’s rice exporters. However, it can be planted in any general, irrigated area and harvested throughout the year with the main harvests taking place in April and July.

Vietnamese OM 5451 rice is a long-grain variety of fragrant rice created by a crossbreed combination between the Jasmine 85 and OM 2490 varietals. It is primarily grown in the Mekong Delta provinces, gives a full yield and meets export standards. The grain of this varietal is long, slender, a little chalky and has a slightly milky colour, according to GIA International Corp, one of the top Vietnamese processors and exporters of rice and grains.

Thach, however, added that it is difficult to judge which is which when blended but OM5451 does not boast the unique fragrant aroma of the Sen Kro Ob varietal, although both are soft-cooking.

Thach added: “This is a technical issue and only the inspection authority or a certified inspection company can ascertain the identity of the varietal,” he added. “We need the Ministry of Commerce and other relevant ministries to work together on this task.”

On Nov 4, the price of Cambodia’s Sen Kro Ob was $730 per tonne free-on-board (FOB) compared with Vietnamese Jasmine, which was priced between $603 and $607 per tonne, and Thailand Hommali, which was valued at $917 per tonne, according to theThai Rice Exporters Association.

Heng Pheng, chief executive officer of Thmor Korl Rice Import Export Co Ltd in Battambang province, said he has not received any orders for a mixture of varietals. In our rice milling, we process only Sen Kro Ob and other premium fragrant rice – such as Phka Ramdoul.

“Here [in Battambang] we process each rice varietal separately, never mixing them. If we buy Sen Kro Ob, we process Sen Kro Ob and likewise with the other varieties. We process 100 to 200 tonnes per day and now we are processing the Phka Ramduol varietal as farmers have begun to harvest that particular crop.”, he added.

Lun Yeng, secretary-general of the Cambodia Rice Federation (CRF), said that while some buyers ask for quotations from our rice millers for blends of rice varietals, no one does it.