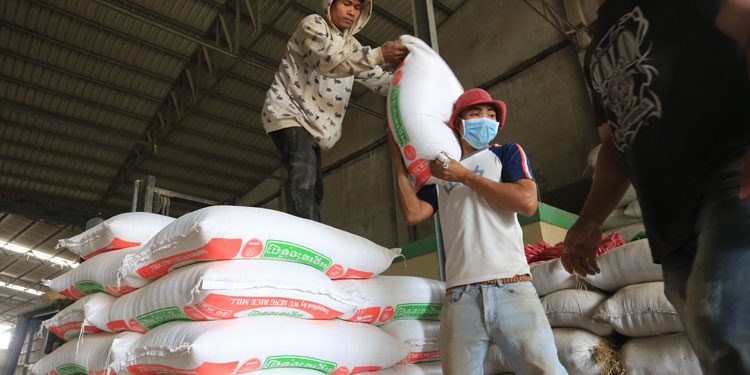 Cambodia is expected to export around 750,000 tonnes of milled rice by the end of the year, according to a senior executive at the Cambodia Rice Federation (CRF).

CRF’s president Song Saran said demand for Cambodian rice in the global market is increasing and the CRF expected exports to reach 800,000 tonnes this year. However, because there was drought, and flash-flooding in September, the figure may change.

“Exports rebounded by the end of October when farmers started harvesting after the floods,” Saran said.

Minister of Agriculture, Forestry and Fisheries Veng Sakhon said on Monday rice exports from Cambodia in the first 11 months of the year rose 16.9 percent, reaching 601,045 tonnes compared with the same period last year. He added that more than 481,000 tonnes of the rice exports were fragrant rice and 113,703 tonnes were white rice varieties, while around 6,151 tonnes were parboiled rice.

“More than 60 countries ordered rice from Cambodia in the first 11 months, including 24 out of 27 countries in the European Union, China (including Hong Kong, Macau and Taiwan), six Asean members and 29 other countries,” Sakhon said.

He said for November alone, Cambodia exported about 64,740 tonnes of milled rice.

Saran, however, said that by November and December, there are other issues affecting exports, including a lack of containers and no space on shipping lines for ocean freight.

“This month, the CRF plans to put aside more than 100,000 tonnes for exports. Therefore, we expect the exports will be around 750,000 tonnes by end of the year if we
can solve the availability issue of  containers and shipping lines for ocean freight,” he added.

“Demand for Cambodia rice still exists and orders are increasing although orders from some countries have dropped. If we have enough stock, we can process and export because we have a wide range of markets. We expect about a 20 percent increase by the end of the year, reaching 750,000,” Saran added.

He said that Cambodia has only new stock and new crops, so the price is better than neighbouring countries where the market price has plummeted and has not been stable recently, while the price of milled rice and paddy in Cambodia is stable.

According to the CRF, as of Nov 30 the price for jasmine rice (Malys Angkor) was $785 per tonne.

The price of paddy is around 1,200 Riel per kilogramme for grade A, but for grades B and C the price is a bit lower.

As of November 30, the Kingdom exported more than 1.77 million tonnes of paddy to Vietnamese importers. Exports were about 26,619 tonnes per day, according to figures from the Ministry of Agriculture, Forestry and Fisheries.

Nonperforming loan of microfinance in Cambodia fall to 2.27% in October