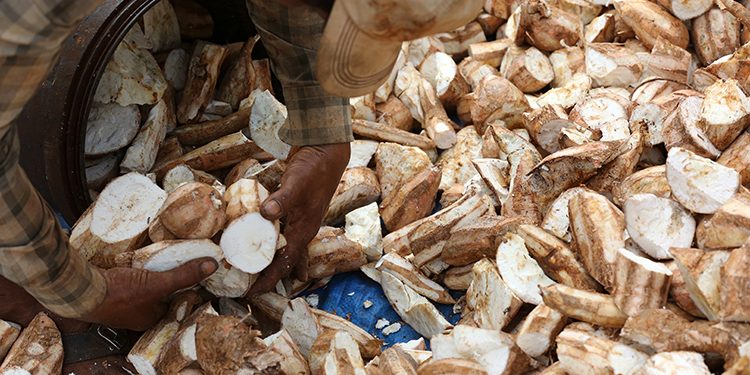 The commerce ministry is considering the implementation of the National Policy on Cassava 2020-2025 in the provinces of Battambang and Siem Riep with provincial support.

Speaking at the two regional workshops, Reach Ra, Secretary of State with the Ministry of Commerce said, in February 2022, the Minister of Commerce signed an agreement with the Guangxi Zhuang Autonomous Region to boost the export of cassava to 400,000 tonnes per year and provide trade facilitation to speed up the process.

Representatives of relevant institutions, local authorities and departments of the provincial administrations also attended the event.

Cambodia-China, Cambodia-Korea Bilateral Free Trade Agreement and the Regional Comprehensive Economic Partnership Agreement (RCEP) with 10 ASEAN Countries and Foreign Partners such as  China, Japan, Korea, Australia and New Zealand, make up the Cambodian market for the export of many goods, especially agricultural goods, duty-free or low-tax and quota-free.

The price of fresh cassava is between 200-280 riels and the dried variety costs between 700-780 riels per kilogramme.

He said that cassava was cultivated in nine districts in Battambang province, with a total yield of 3,276,073 tons on a total cultivated area of 145, 894 hectares.

In the last three years, the price of fresh and dried cassava improved, bringing profits to farmers, and that the department was regularly monitoring the prices, he added.

In Siem Reap province, cassava is a potential agro-industrial crop with a total cultivated area of 67,954 hectares with a yield of about 15.65 tons.

Farmers sell to traders to export fresh cassava to Vietnam and dried cassava slices to Thailand.

There are eight potential districts for the cultivation of cassava crops in the province.

He emphasised that the workshop was not only aimed at disseminating the National Policy on Cassava
2020-2025 but also to monitor the progress and collecting input.

Keynote speakers from the ministry of commerce, agriculture, forestry and fisheries shared new information and knowledge with the participants on trade promotion through the use of tools.