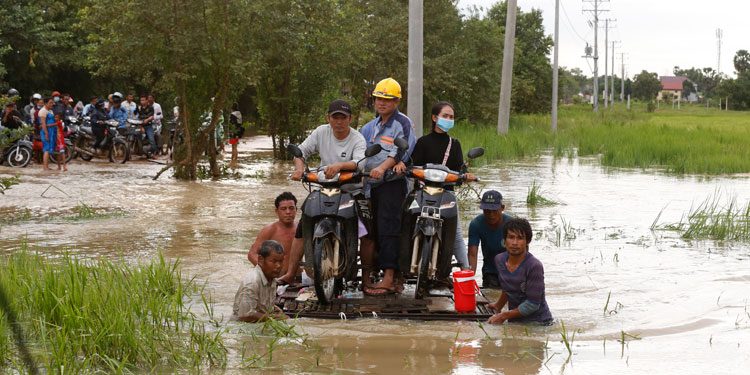 Despite floods inundating areas surrounding the new Phnom Penh International Airport and some access roads to it, an official from the State Secretariat of Civil Aviation (SSCA) said that it will not affect or delay construction.

“The inundated area is only on the access road to the construction site, but the whole construction is well-protected. It will not be delayed but it has caused some issues concerning  transport of construction material to serve the project and construction cannot be carried out faster because some roads are blocked,” he said.

He added that the company has built a dam equipped with a pump to release from the construction site.

Cambodia Airport Investment Co Ltd, a joint-venture between local conglomerate Overseas Cambodia Investment Corp (OCIC), owned by Pung Kheav Se, and the government’s State Secretariat of Civil Aviation, will develop the 2,600 hectares of the new Phnom Penh International Airport in Kandal Stung district, about 20 kilometres from the capital. It is situated between Takeo and Kandal province.

The total investment of $1.5 billion will come from loans from foreign banks, $280 million from the OCIC and $120 million in registration capital.

He said the airport will have the road connected to the second and third ring roads and there is also a plan to link the fourth ring road, he added. The company will build a “skyway” to reach the airport too, he added.

“There will be no issue regarding flooding of the road or the airport because they are thinking about the next 100 years. The company has already studied Bangkok’s Suvarnabhumi Airport  as an example to avoid flooding, so they will do something to avoid it,” noted Vutha.

He said the company does not complain anything regarding the funds to develop the airport because everything is going smoothly.

Moeng Youleng, director of Kandal Provincial Department of Public Works and Transport, could not comment on the flooding but said the authorities are now preventing the water from  flowing to nearby communities.

“Some areas where we can prevent this, we will do so, but some areas we cannot succeed. We will let the water flow until it is shallow then we will start fixing the road,” he added.  He said that at present there is one road link to the new Phnom Penh International Airport.

“The province is extending National Road 2 and 3 and, in the future, we will build National Roads 31, 33 and also an expressway. In the meantime, we constantly fix the old road,” he added.

Pung Kheav Se, chairman of OCIC, had said earlier that the new Phnom Penh International Airport will divided into three phases of development with the first phase opened by 2023.

He said that so far the construction of the five-storey passenger terminal is 5 percent complete and will be ready by 2022. The 108-metre airplane control tower is also 5 percent complete and will be operational by 2022, as also will be the 4,000-metre runway, VIP terminal building, solid waste building, sewerage system, cargo warehouse, airplane petroleum station and firefighter station among other facilities.

“The investment cost of
the new Phnom Penh International Airport is $1.5 billion which is not including the price of the land and it is expected to welcome 13 million passengers per year once it opens,” Kheav Se said.