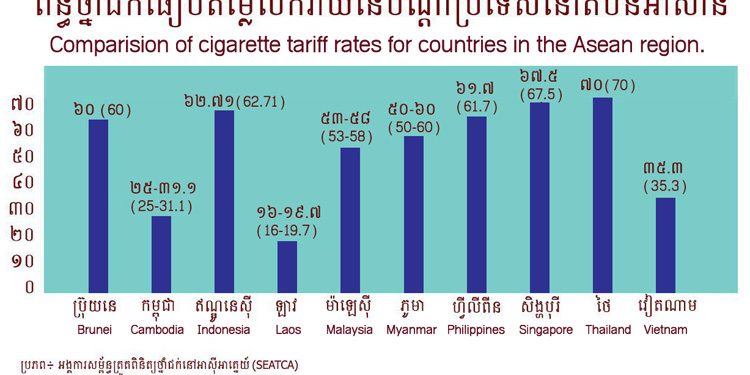 0
SHARES
26
VIEWS
Share on FacebookShare on Twitter
Cambodia is being urged to raise taxes on tobacco products to 75 percent of the retail price in order to collect an additional $235 million in revenue over the next five years and $933 million over the next 15 years, according to the United Nations Study on Investment in Tobacco Control in 2019.

Dr Mom Kong, executive director of the Cambodian Movement for Health, stated that Cambodia has one of the lowest tariff rates on tobacco products in Asean and that the current tariff rate on tobacco products compared to retail prices is only 25 percent for domestic cigarettes and 31.1 percent for imported cigarettes, while Thailand has a tariff rate of 70 percent, Singapore 67.5 percent and Myanmar 50 to 60 percent.

“Raising tariffs on tobacco products is a win-win strategy that gives Cambodia extra income, especially during the COVID-19 crisis, as well as reducing the impact of tobacco use,” Kong said.

In addition, he said raising tobacco taxes reduces mortality and disability due to the decline in tobacco usage which indicates that negative health effects are also reduced.

“I think the government should raise taxes on tobacco production like other countries because if the product is too cheap, the number of smokers in Cambodia will increase and the impact of smoking will increase,” Phoeung said.

Sdoeung Sokun, of Kampong Speu province’s Phnom Sruoch district, said: “I believe that if the government imposes more taxes on tobacco products, the state will receive an additional level of tax revenue and some smokers will reduce their smoking.”

According to a study by the United Nations, 15,000 Cambodians die each year from diseases caused by tobacco use.

In addition, tobacco use costs $649 million a year, equivalent to 3 percent of Cambodia’s gross domestic product $584 million was due to the loss of economic productivity, premature death, reduced productivity from smoking cessation and absenteeism.