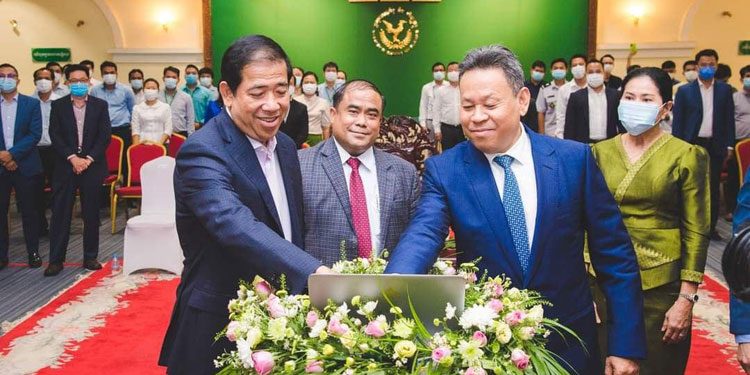 The purpose of introducing it is to modernise and automate revenue-sharing data between the tax data management and financial information.

The system functions by transferring revenue data from the tax data management system to the national and sub-national level instead of issuing payment slips, which previously took a long time and involved excessive paperwork and complicated procedures. It also facilitates the transmission of tax revenue data by clearly separating types of taxes and duties.

Kong Vibol, the GDT’s general director, said that this is important for modernising tax revenue collection. He said so far the GDT has modernised more tax systems to manage and improve revenue mobilisation.

“We have provided the mediation tool between General Department of Customs and Excise’s revenue collection system and we will introduce the vehicle management system for the Ministry of Public Works and Transport in the near future,” he said.

Secretary of State of the Ministry of Economy and Finance (MEF) Hean Sahip said the financial management information system (FMIS) has been connected with other systems including the Customs data automation system, the Customs electronic system, the National Bank of Cambodia and many commercial banks.

“This mediation system is a successful achievement of the government’s financial public management reform policy in order to manage and collect tax revenue efficiency,” he said.

Anthony Galliano, group chief executive officer of corporate finance firm Investment Management, said the FMIS, at least initially, has been implemented to support the government, effectively as an in-house system for a more efficient management of the national budget and financial management process.

“In the short term I would expect the FMIS to have much more impact on the private sector, improving financial and management information that can only enhance administrative processing and decision-making in the public sector,” he said. “Unofficial payments to process tax returns are outmoded, given the acceptance of file downloads of returns and now e-filing and also the ease of tax payments directly through the banking system.”

Galliano said there is little reason to visit tax branches anymore because the tax filing process is essentially automated.

“We don’t live in a perfect world. There are still faults in the system, especially as pertains to the audit process and, at times, its fairness.  Generally, there have been vast improvements made over the years and, compared with other Asean developing markets, the taxation system in the Kingdom continues to make significant productivity and service improvements and is progressively attaining improved transparency and governance,” he said.

However, he said the common thread of dissatisfaction presently is the scale of audits, both in their limits and comprehensiveness.

“In times of financial hardship, businesses are seeking incentives to survive and not additional hardships that advance any deterioration in the health of an enterprise,” he said. “While it is understandable that the government is facing challenging times and required tax collection levels are at risk, rather than punitive audits, implementing additional taxes such as capital gains tax are an equitable alternative.”