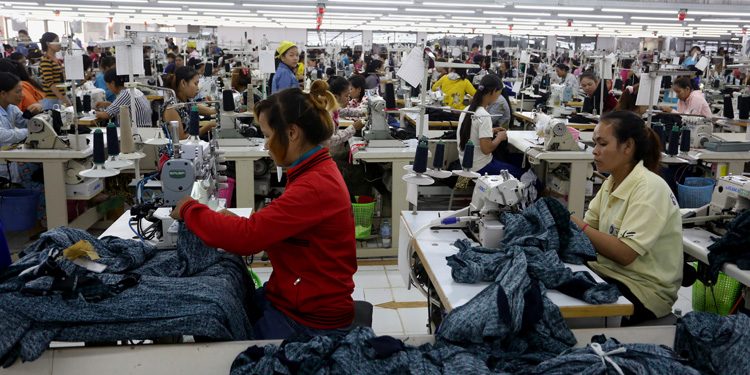 The Kingdom’s annual $7 billion garment and textile sector, which has already been hard hit by the Coronavirus pandemic, is still struggling to make up for its partial loss of a preferential zero-tax trade deal provided by the European Union due to end in August.

The Garment Manufacturers Association of Cambodia (GMAC) and the Cambodia Footwear Association (CFA) on have again called on the European Union to postpone its partial withdrawal of what is known of the Everything but Arms agreement (EBA).

It refers to an analysis article authored by two academics from the University of Delaware in the United States that states once the withdrawal becomes effective, the EU will shift out of Cambodia to other duty-free countries and the sector would collapse.

On June 2, the GMAC and CFA together with EuroCham (the European chamber of commerce had already sent a letter of appeal to the European Union asking to postpone the scheduled August 12 implementation of the partial suspension of EBA benefits for Cambodia because the COVID-19 pandemic has halted production and slowed global demand to a crawl, delivering a devastating blow to the country’s apparel, footwear and travel goods manufacturers and workers. It’s estimated the loss will cost about $1.1 billion.

“We have already sustained hundreds of factory closures and the loss of hundreds of thousands of jobs. To proceed with the EBA withdrawal in this context, we explained in our letter, risks a devastating double blow to our sectors that could make the damage structural and permanent,” the GMAC said.

“We continue our appeal to the EU to postpone the schedule withdrawal and we are providing you a copy of the article for your reference,” it added.

The article, which appeared in Just-Style newsletter, found that Cambodia garments are one of the few formal sector employment opportunities for Cambodians including for rural women. Cambodia competes with other EBA beneficiary countries and with the EBA withdrawal it could increase the perception of the risk of social responsibility by sourcing from Cambodia.

“Leading buyers may not only avoid the lines that have lost EBA benefits, but may avoid sourcing from Cambodia altogether, creating a further downward spiral that could collapse our sectors,” the GMAC said.

Hoever, Chan Sophal, director of the Centre for Policy Studies (CPS) said that EBA is about tariffs and this will not lead to the country’s main sector collapse.

“It could be some factories will collapse but the whole sector will not because Cambodia not only exports to the EU but also to the US and other markets.

Sophal said nonetheless the EU should provide an exemption because otherwise there will be a painful impact on hundreds of thousands of workers who are already effected by COVID-19. “If the EU wants to help Cambodia workers stay employed, they should postpone the withdrawal,” he said.

Sophal said because of this experience, the government needs to diversify its production lines, looking into the country’s agriculture, services, agro-industry and manufacturing to attract investors who are now turning away from China.

“I think the government also finds itself strongly dependent on garments and should tap others potential sectors while more investors turn away from China and move to Vietnam,” he said.

COVID-19 has caused hundreds of factories to suspend operations, leaving hundreds of thousands of workers unemployed.

CFFA: Up to 15 percent of Cambodia logistics providers ‘heading for bankruptcy’