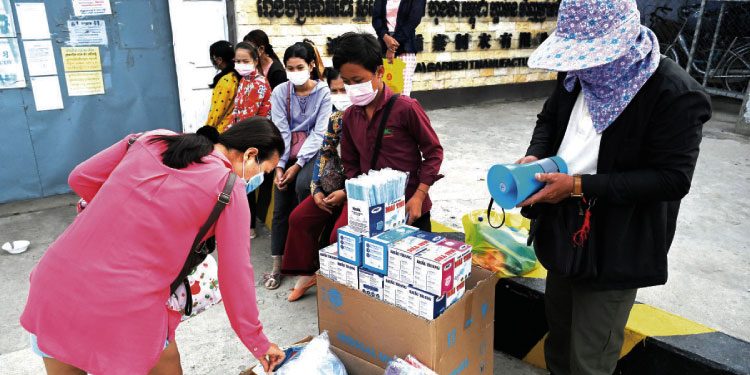 The value of exports of garment and accessories from Cambodia rose by 3.3 percent to $5.021 billion in the first eight months of this year, compared with 4.861 billion during the corresponding period last year, according to the statistics from the Ministry of Commerce.

The value of apparel product exports accounted for 45 percent of the country’s total exports of $11.086 billion during the period.

The US, the EU, UK and Japan are the major apparel export destinations of the Southeast Asia nation.

The increase of exports of apparel products showed the significant progress of the garment sector despite the Covid-19 pandemic continuing.

His comments were likely linked to the EU partially withdrawing Cambodia from the Everything But Arms (EBA) Act, said observers.

Cambodia has received new purchase orders on garment products because of uncertainty of production in garment-producing countries such as Bangladesh, Myanmar, Brazil and Vietnam lately caused by the Covid-19 outbreak, Mr Hun Sen said.

“The issue of whether or not there are preferential tariffs on imports into the European market, except for arms [EBA], is not important for Cambodia, but what is important is there is a large number of buyers from Cambodia,” Mr Hun Sen added.

The EU’s partial withdrawal of Cambodia from the EBA took effect On Aug 12, 2020.

Under this partial withdrawal, some products of the Cambodian garment and footwear industry started facing import duties in the EU. Because of this, the share of the garment exports of the country to the EU was diverted to the US and other countries.

In 2020, Cambodia exported garments worth $7.420 billion, a year-on-year decrease of 10.24 percent, according to the 2020 annual performance report of the country’s ministry of commerce.

Lim Heng, vice-president of the Cambodia Chamber of Commerce, said last week that the growth in exports of Cambodia reflected control of production chains in Cambodia ensuring operations continued under the government’s efforts to curb the virus crisis.

“With trade pacts bilaterally and multilaterally, Cambodia is expected to receive more investment, which will boost both exports of finished products and imports of raw materials to feed the production chains,” Heng added.

To help the country’s garment, footwear, travel bag and tourism sectors cope with the downturn caused by the COVID-19 pandemic and the accompanying lockdowns and supply chain disruptions, the Cambodian government has so far announced eight rounds of financial support programmes.

“Our garment industry has been functioning normally and we have seen a remarkable rise in purchase orders because our country is now safer from Covid-19 than other garment manufacturing countries,” Mr Hun Sen also said during a news conference on a Covid-19 vaccination drive.

Cambodia launched a Covid-19 inoculation campaign in February, with China being the key vaccine supplier.

The country reported 648 new Covid-19 cases on Saturday, pushing the national total caseload to 103,482, the ministry said, adding that seven new fatalities were registered, bringing the overall death toll to 2,096.

An additional 492 patients recovered, taking the total number of recoveries to 96,767, said the ministry.

The garment industry is the largest foreign exchange earner for Cambodia. The sector consists of about 1,100 factories and branches, employing approximately 750,000 workers, mostly female, according to the Labour Ministry.

Picking experts is key to making the most from real estate, says RICS