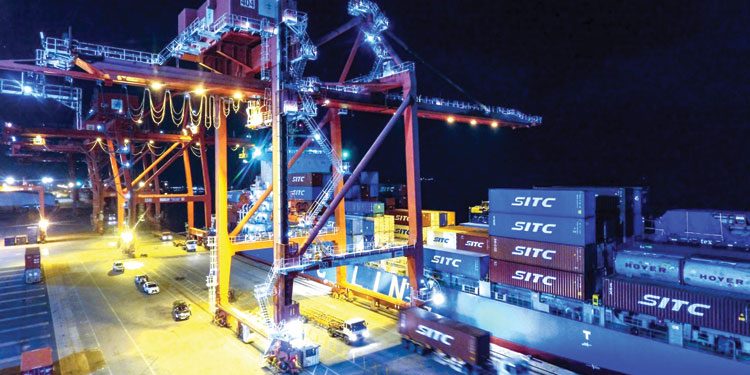 Having more free trade agreements with partner countries is a good deal for Cambodia that currently gets its biggest advantage from trade preferences under its Least Developed Country status.

However, while its current production capacity remains low and less competitive than others, Cambodia would not necessarily gain a fair benefit from the movement.

Cambodia has just officially signed a free-trade agreement with China (CCFTA) during a visit by China Foreign Minister Wang Yi to Cambodia in mid-October. The country is in negotiations with South Korea for another FTA.

Group Chief Executive Officer of corporate finance firm Cambodian Investment Management Anthony Galliano said that China has been the overwhelming main beneficiary of the $9 billion bilateral trade relationship, enjoying a trade surplus of more than $6 billion, with China, accounting for $8.3 billion – 37.2 percent of the total merchandise of imported goods.

He said Cambodia’s exports have been traditionally dominated by the apparel industry, with the most important export markets being the US and the European Union, which took 26 per cent and 25 per cent of exports respectively last year.

“In the short term, I see Cambodia’s agriculture sector benefiting most from the agreement and, in the longer term, the goal is to increase investment, trade, tourism and transportation,” he said.

Galliano said the FTA is an important step forward in building cooperation in the joint construction of the Silk Road Economic Belt and the 21st Century Maritime Silk Road and the 2010 Asean-China Free Trade Area, which has already reduced tariffs.

He said the key challenge is to reduce the trade surplus with China and for the Kingdom to diversify its trade partners.

“On the one hand China is the dominant importer and the US and EU are the largest export markets. The FTA is a step in the right direction to address this imbalance, with the objective of chipping away at China’s trade surplus and to lessen dependence on the current export markets,” he said.

He added, however, the long-term aspiration should be to reduce the concentration risk on these three dominant trade zones and for the Kingdom to execute FTAs with new trade partners.

Te Taingpor, president of the Federation of Associations of Small and Medium Enterprises of Cambodia (FASMEC) said that the CCFTA and the soon-to-be FTA with South Korea is a strong encouragement to put Cambodian products into international markets.

He said Cambodia at this time must not lose focus but boost local production to respond to the FTA.

“We strongly support the FTA with China and the upcoming trade deal with South Korea that will provide us with more chances to export our products,” he said. “However, we need to increase our production chain and we are now working at the provincial level to create SME [small and medium enterprise] industrial parks. We want each province to be able to produce goods on their own.”

“So we cannot export our products to the international markets if we don’t have high enough quality and standards,” he said.

Cambodia will mostly rely on agricultural products for trade with partners around the globe, a move that requires the sector to be more developed and productivity increased.

Under the CCFTA, this would allow around 340 more Cambodian commodities to be exported to China, bringing the total to more than 10,000. Most of the products are in agriculture and agro-processing and are in addition to what Cambodia has received from the Asean-China FTA. The agreement will allow China to list more than 9,500 products for export to Cambodia.

Among the additional 340 commodities in the Cambodia-China FTA, 95 percent of them will be untaxed. Taxes will be dropped on the remaining 5 percent in at least 10 years.

However, commodities that are currently taxed are rice, rubber, tobacco, sugar, powder and paper products while a further 51 commodities, including auto parts will be taxed.

Minister of Agriculture, Forestry and Fisheries (MAFF) Veng Sakhon said previously that reaching the FTA is not the end of the process. He said Cambodia had a long way to go before it can send more agricultural products to international markets because issues regarding sanitary and phytosanitary arrangements remain unresolved.