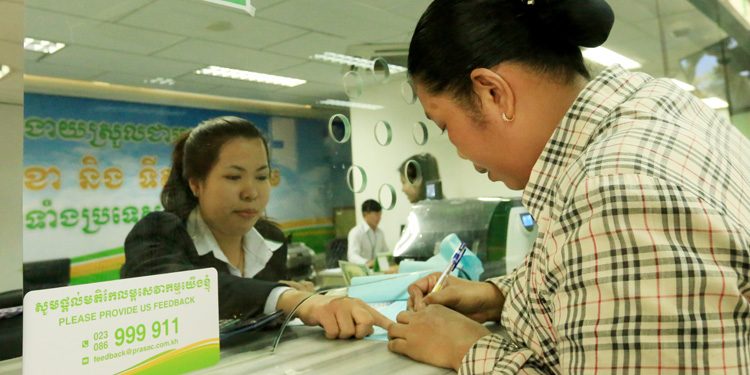 Financial service providers have been seeing the number of loan restructuring requests slow down, claiming customers are able to repay existing debt because their businesses are running as usual, according to industry insiders.

Kaing Tongngy, head of Cambodia Microfinance Association’s (CMA) communication department said that as of the third week of June, the total of loan restructures across the microfinancial institutions (MFIs) was valued at more than $1 billion with 220,000 customers given approval among the 230,000 customers who requested assistance .

However, he said starting from June, the numbers of requests dramatically declined from 20,000 applications a week to just nearly 10,000.

“And we expect that from now on the requests will further slow down so it means that customers are able to repay debt as businesses resume to normal except in the tourism sector,” he said.

Mar Amara, ACLEDA Bank Plc’s executive vice-president and group chief financial Officer, said that as of June 22, the bank has approved up to 982 customers for loan restructure to a value of $93.75 million .

“ACLEDA Bank Plc is responding to COVID-19 by taking pro-active action to provide help to its customers in distress by restructuring their loans to eligible individual and business customers,” she said, adding that the trend of loan restructure requests is slowing down because customers’ businesses are starting to recover.

PRASAC Executive Vice-President and Chief Marketing Officer Say Sony, said that the number of requests increased for the last three months but now there was a slowing down in the number of clients asking for restructuring.

Prime Minister Hun Sen appealed on Wednesday for a reduction in interest rates or a restructure in repayments in order to ease the difficulties of people during the virus pandemic.

He said he encouraged and supported any action taken by banks or microfinance institutions to confiscate the collateral of debtors who refuse to repay loans following incitement by certain people.

Tongngy said based on principles and commitments, MFIs will continue to provide loan restructures for affected customers until the end of 2020.

“Our people understand well about their duty and we would like to express our thanks to customers who have been slightly affected who have not requested a loan restructure so we can use the money to help the most-affected customers,” he said.

Tongngy said that loan restructuring has been provided in tourism, construction, transportation, agriculture and the garment industry.