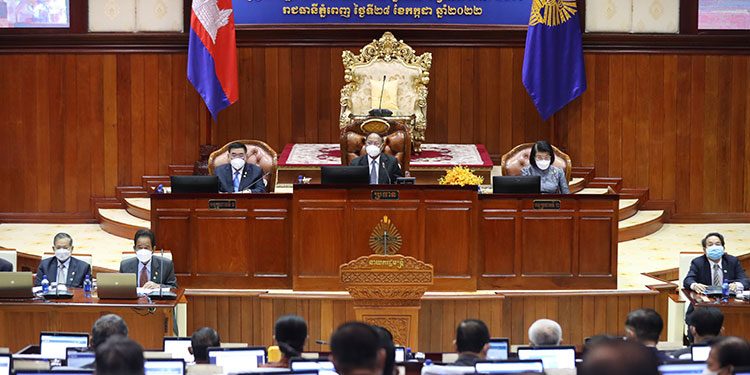 Cambodia’s National Assembly yesterday approved the law on non-tax revenue management that will not add new tax and customs burdens for consumers five years after it was initiated by the Ministry of Economy and Finance (MEF) for the country to have an updated comprehensive legal instrument.

The National Assembly passed the law on non-tax revenue management with 96 votes out of 106. The law—initiated by MEF for drafting in 2017 to enhance the legal framework—consists of 11 Chapters with 101 Articles and stipulates the determination of core institution, institutional structures and mechanisms of non-tax collection and management.

“Non-tax revenue is a very big part of the national budget revenue that covers broadly and are from many sources of sectors and activities under responsibilities of ministries and institutions at both national and sub-national levels,” Pornmoniroth said, adding that the revenue accounts for 2-3 percent of Gross Domestic Product (GDP) per year.

The law will also fulfill the loopholes in practical experiences both at national and international levels in terms of empowerment, division of responsibilities and full connectedness between ministries, institutions, sub-national administration and revenue collecting body, the MEF.

The responsibility of the ministry is to regulate, monitor and push for the collection of this type of revenue that plays a vital role in the structure of the national revenue budget that previously had relied heavily on tax revenue under the existing enacted tax law that generally regulates revenue collected from private sector and consumers.

“However, this revenue [non-tax revenue] is a type of by-sector revenue that is very complicated to manage, while collection has not yet reached its maximum potential as there has not been a clear base of legal framework to assure effective management,” Pornmoniroth said.

Chheang Vun, Chairman of the Economic, Financial, Banking and Auditing Committee of the National Assembly, said the new law will help increase national revenue, and encourage budget distribution on the right targets but not put any new burden on consumers who are the actors in the economy after it is passed.

“I would like to stress that the law on the non-tax revenue that we are discussing here will not add new burden to our consumers as it is neither tax nor customs but it will strengthen the state’s revenue through empowering the government to utilize the budget. After this, [the government] will have to collect and manage this revenue well,” Vun said.

Chapter 2 of the law consists of 43 articles — from 4 to 46. Article 4 of the first section of this chapter that stipulates the types of non-tax revenues states that this revenue is divided into revenues from allocation of state properties, public enterprises and financially autonomous entities, public services, penalties and punishment and others.

Article 6 of the chapter points out that the revenue from selling and swapping private properties of the state as immovable properties allocated by following the rules and procedures set in relevant applicable laws and regulations is also included in the category of non-revenue.

Article 13 states that the government can generate revenue from partnership arrangements investment between the government and private sector in terms of the construction of public infrastructure or supplying public services such as transportation and logistics services.

The transportation and logistics services include roads, bridges, railways, airports, ports, parking lots and telecommunications, production and distribution of electrical power, pipelines for oil and gas, and other public services in mines and energy sectors, according to Article 13.

Article 20 states that in case enacted laws or regulations regarding establishment of public enterprises or financially autonomous entities do not stipulate the determination or division of dividends as per a set rate as percentage of net profit or surplus, they are obliged to pay dividends or cash surplus at least 10 percent to the national budget.

Article 21 says that the finance minister has the right to demand that enterprises or financially autonomous entities pay in part or fully the idle capital into the national budget if they are found not in need to investment or development.

Article 97 states that any authorized person who commits offences stipulated in chapter 10 as corruption offences shall be placed in the exclusive responsibility of Anti-Corruption Unit (ACU) to undertake investigation and file the case in courts.