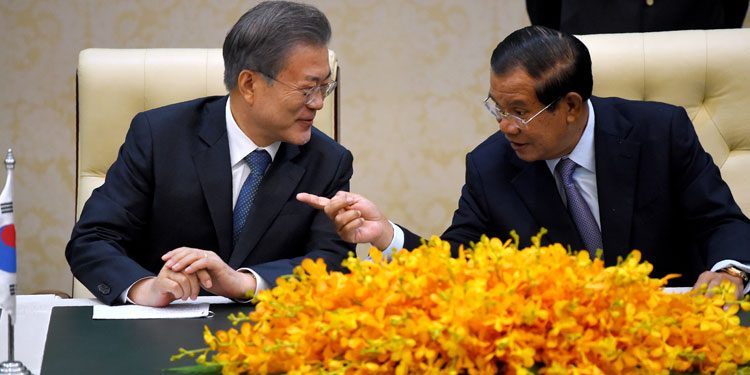 Cambodia began the fourth round of free trade talks with South Korea this week, as the Kingdom continues to embark on expanding regional integration with an aim to diversifying export opportunities.

The latest round of negotiations follows the signing of a historic bilateral free trade agreement (FTA) with China and the successful conclusion of the Regional Comprehensive Economic Partnership (RCEP) multilateral mega-deal signed by 15 Asia-Pacific countries on Sunday.

According to the South Korean Ministry of Trade, the talks, which began on Tuesday, will outline general rules for the agreement in the areas of customs clearance, market access as well as a range of other components.

The ministry also recognised that Cambodia has enjoyed an impressive growth rate over the last decade, noting its predominantly young population present high growth potential. Seventy-two percent of the Kingdom’s citizens are aged 35 and below.

Penn Sovicheat undersecretary of state for Commerce Ministry told Khmer Times yesterday that both sides are striving to make the deal mutually beneficial.

“Negotiations always have mutual concessions. The common principle of ‘give and take’ applies, but we expect that once completed, our negotiations will result in better trade flows and market conditions for the movement of goods between the two countries,” he said.

“The current decline in exports and imports between the two countries is nothing unexpected considering the impact of the pandemic, but it is a good time to hold these negotiations and we hope to be able to mediate better after this agreement,” he said.

The latest talks, the fourth between the two nations, come a day after Vietnam and South Korea talked about strengthening their bilateral ties during the 18th Vietnam-Korea Economic Committee Meeting, held online on Tuesday.

According to Vietnam News (VN), Deputy Minister of Planning and Investment Tran Quoc Phương placed emphasis on the strong development of ties between Vietnam and South Korea across various fields.

South Korea was Vietnam’s third-largest trade partner last year, after China and the US, their fourth-largest export market and second-largest source of imports, according to VN.

Currently, Cambodia and South Korea aim to have a deal agreed to before next year. Both countries are looking to secure trade between the two countries, trade that grew to a record $1 billion in 2019, up 6 percent from 2018 as reported by Khmer Times in October.

Over the same period, exports from South Korea to Cambodia rose by 5.5 percent to $697 million, making Cambodia the 58th-largest export destination for South Korea.

Currently, South Korea exports mostly cargo trucks, drinks and textiles to Cambodia, while the Kingdom primarily exports clothes and shoes in the other direction.

When the pact is signed, Cambodia will be added to South Korea’s list of direct FTA partners in Southeast Asia.  That list currently includes Vietnam and Singapore, according to South Korea’s state news agency.

In the wake of the partial Everything but Arms withdrawal (a tariff deal with the European Union), Cambodia has moved to expand its export opportunities and lessen its reliance on European and US markets. Cambodia and South Korea already share membership in the wider FTA between the 10-member Asean pact, but a new bilateral FTA between the two nationals will allow further customisation.

Although details of the trade agreement with South Korea have yet to be negotiated, Cambodia will likely be setting its hopes on reaching an agreement similar to that concluded with China, in which 97.53 percent of Cambodia’s product exports achieved zero tariff status.