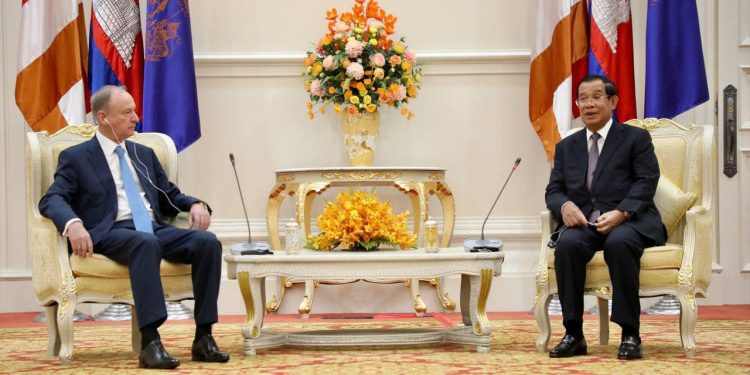 Prime Minister Hun Sen raised the prospect of a free trade agreement (FTA) with Russia during a two-day visit to Cambodia by Russian Security Council Secretary Nikolai Patrushev, which wrapped up yesterday.

The Prime Minister said an FTA would help expand trade and investment between the two countries which mark 65 years of diplomatic relations this year. He reportedly suggested either a bilateral agreement or one under a multilateral framework such as an FTA with the Eurasian Economic Union, which provides for free movement of goods, services, capital and labour between members Armenia, Belarus, Kazakhstan, Kyrgyzstan and Russia.

The EAEU had a total market of 184.6 million people and a combined gross domestic product of $4.778 trillion as of last year, according to the International Monetary Fund. Cambodia’s ASEAN colleagues Singapore and Vietnam already have FTAs with the EAEU.

Bilateral trade between Cambodia and the EAEU was worth $67.37 million in 2020, more than 18 percent higher than in 2019. Cambodia exported $52.19 million, and imported $15.18 million of EAEU goods, according to consultancy Dezan Shira & Associates. Most of Cambodia’s exports to the EAEU are textiles and agricultural products, while major imports include tractor machinery and agricultural vehicle parts.

“Last year, bilateral trade reached $55.39 million. There has been a growing number of Russian tourists, with nearly 40,000 visiting pre-Covid in 2019, while some Russian investors operate hotels, restaurants, and a resort development in Preah Sihanouk province,” said Dezan Shira’s Maria Kotova.

“Cambodia has a large textiles industry, coupled with competitive labour rates. This is expected to receive a boost by providing low-cost finishing to more costly Japanese, Korean and Australian clients as part of the regional RCEP [Regional Comprehensive Economic Partnership] agreement that includes ASEAN nations.

Cambodia is also hoping to take advantage of Russian technology and training and has been talking about expanding the use of nuclear technology in priority areas such as industry, agriculture, food safety, energy, construction, the environment and medicine.

The government signed a trilateral memorandum of understanding (MoU) with the Russian Atomic Energy Corporation and the China National Nuclear Corporation in July.

“If Russia and Cambodia sign a free trade agreement it will benefit both countries,” said Hong Vanak, Director of International Economics at the Royal Academy of Cambodia.

“Russia has good cooperation with the EAEU that is more beneficial for Cambodian than to export goods just for Russian demand. Moreover, if an FTA is signed it will encourage Russians to invest more in Cambodia. Russia is looking at Cambodia’s potential economic development because Cambodia has signed free trade agreements with China and South Korea and is expected to agree one with the UK in the future. Also, Cambodia has good cooperation with the US and EU in terms of trade,” he said.

Russian and Cambodian business leaders held a virtual summit at the end of July to discuss opportunities in IT, cybersecurity, digital technology and energy. The first Russian Online Business Mission to Cambodia ended with an agreement to increase bilateral cooperation. Since then Cambodia has introduced a new law on investment, which Vanak said should prove attractive to Russian businesses.

“Cambodia has revised its investment law, promotes efficient logistics and invests in infrastructure that may encourage Russian investors. Also, if an FTA is signed, I think Russia tourists will flow into Cambodia because of the country’s culture that attracts Russian tourists and encourages Russian’s to invest in the hospitality sector as well,” he said.

AirAsia to resume flights to Phnom Penh, Cambodia on January 26, 2022