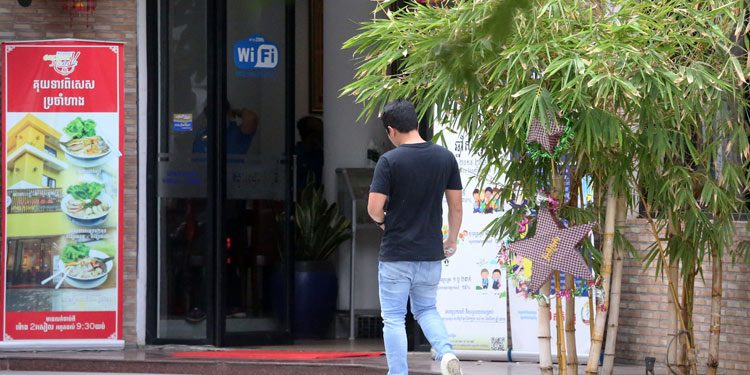 Customer-facing businesses such as restaurants and convenience stores have become complacent in testing customers’ temperatures, ensuring face masks are worn and providing hand sanitiser, in sharp contrast to previous measures being undertaken last month and against health ministry recommendations.

Khmer Times entered a popular 24-hour convenience store branch near the Royal Palace yesterday not wearing a mask and was not tested with a forehead temperature check, despite a clear sign on the front door advising its requirement. The attendants were wearing facial masks, however, the only hand sanitiser on display was for sale and not for public use.

“We also ordered a meal from a nearby restaurant and again was not temperature tested nor advised to “social distance” from other customers. This time, hand sanitiser was freely available while only some staff were wearing facial masks”.

This is in stark contrast to the previous investigation by this publication at the start of the month when restaurants and stores were reporting police checks and even being threatened with closure under supposed “unhygienic observations”.

The Under-Secretary of State and Commerce Ministry spokesman Seang Thay told Khmer Times at the time: “If we observe that a restaurant or other eatery business provides services in a manner that induces close contact between humans, then perhaps this business has failed to abide by the rules of social distancing and personal hygiene that have been strictly introduced by the Ministry of Health, thus provoking the implementation of strict measures by local police.”

Many health and policy experts are now concerned that since the Kingdom has recorded no new COVID-19 positive cases for 17 consecutive days and only a small number of non-recovered patients remain in the community, both the general public and officials have become overly complacent.

Cambodia’s Ministry of Health has said that the country’s COVID-19 situation is still in the first wave phase and that the people must remain vigilant at all times and practise stringent self-hygiene and social distancing measures. The Minister of Health spokesperson, Or Vandine, warned this week that the COVID-19 risk level for individual transmission is at an “alarming rate” in the Kingdom and its probability is “not low”.

Khmer Times has previously reported that: “Many asymptomatic cases could have been missed completely, while mild cases are either missed or undercounted. Access to testing is key but remained spotty and not 100 percent accurate, with some reports of the false negative or “miss” rate as high as 40 percent.

“Thus, Ministry of Health officials are concerned and rightly worried about the possibility of hidden cases waiting to be detected, or a single cluster which has not been detected or tested – or even surfaced – and the asymptomatic carriers.”