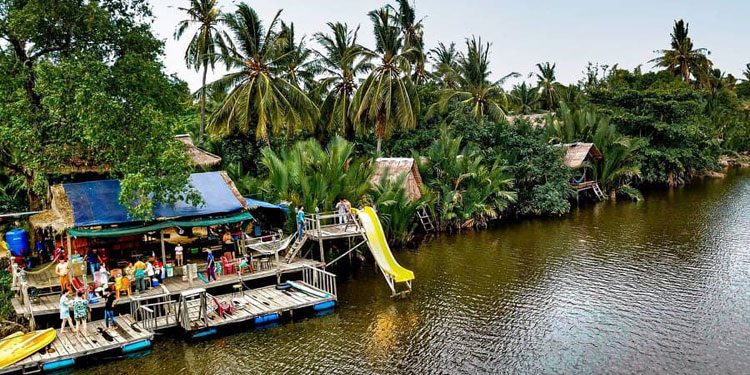 Businesses in tourist hotspots are more hopeful of a boost in trade this year as temples are closed during Pchum Ben, meaning more tourism for other destinations including Kampot and Phnom Penh.

It’s that time of year again where many Cambodians and expats alike celebrate the public holiday, literally Ancestors’ Day, but how will this year’s restrictions affect the celebrations?

With the discovery of 141 monks testing positive for Covid-19 within the first two days of the 15-day festival, the government were quick to cancel the celebrations for the second year in a row with worries of a large-scale outbreak occurring.

Despite this, next week’s three-day public holiday between Oct 5 and 7 has not being cancelled, giving the hospitality industry hopes of a much-needed boost.

The 15-day religious festival is when many Cambodians pay their respects to deceased relatives by bringing food to pagodas. Cambodian Buddhists believe that during Pchum Ben the gates of hell are opened and the spirits of ancestors are released to receive food from relatives.

More than 1 million domestic tourists went on holiday to different provinces during the three-day celebration in 2020, according to a report by the Ministry of Tourism. Tourism Minister Thong Khon told local media the number of tourists visiting tourist destinations across the country rose to 1.112 million in the same year.

According to travel website Agoda, Kampot has many places with only one room left over the three-day festival, including Nataya Roundhouse Coral Resort, Good Morning Kampot Guesthouse, Pippali Hotel and Raing Phnom. That should provide a vital benefit to the famous pepper-growing town.

Johnny JJ, owner of Yellow Sun Hostel in Kampot, told Khmer Times yesterday: “Even with Covid-19 we are still busy every day, but over next week’s public holiday we have most of our 26 beds full and will very shortly sell out.”

Going further north to temple town Siem Reap, the majority of the many five-star hotels including Sabara Angkor Resort and Spa have only one room left with a lot having discounts of up to 83 percent.

Phnom Penh has the most guesthouses and hotels so it will be harder to fill them, but Patio Urban Resort told Khmer Times yesterday staff said they remain hopeful that they will be busy.